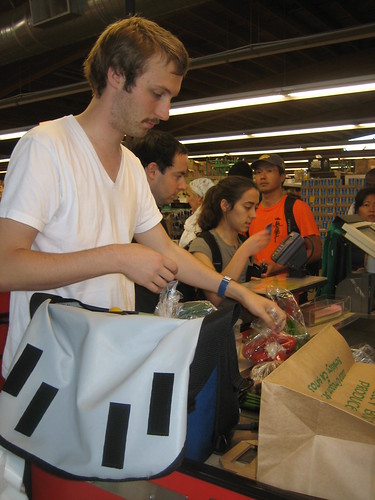 According to the Telegraph and a research team from University of California, Santa Barbara and Yale University, women have a “homing” instinct for food.

“Today, a scientific study says that over many thousands of years evolution has designed women to excel when it comes to hunting down the most fulfilling food. According to the study by a team in California, women are just as good as men at navigating, but they only call on their mental maps when there is food to be found — and the more calories in a food, the more accurate they are at locating it.” From The Telegraph

So that explains why we can all home in on the chocolate aisle then! (Yes that’s irony before anyone forgets feminists can have a sense of humour too). The evidence for this amazing claim? A survey of 45 men and 41 women at six gatherings of a farmers’ market (averaging seven of each gender at each market).

Apparently these hapless bystanders were asked to show researchers where they had bought a particular item, using a compass (it doesn’t really say what they were using the compass for or how a compass fits with the idea of an evolutionary approach to finding food – unless our ancestors carried a compass on the savannahs of Africa?). Anyway they found that women has less error margin than men.

So lets just run by that again. Ask a woman or a man where they bought something relatively mundane like a cucumber and they have a higher error margin, ask them about an occassional or indulgent (and more expensive) buy like honey and they remember better. There’s a surprise. Ask a woman where she bought something (and remember we ask other women this a lot) and she’s adept at giving directions. Ask a man and he isn’t. When was the last time you asked a man where he had located a particular item in a shop? Whereas women ask women on a regular basis.

Add to this the laughably small research sample for such sweeping claims and the fact that, yet again, the research takes no account of the differences in time period, culture or geography. After all if you repeated the same study in a culture where the practice is for men to shop (like some parts of southern africa) would we get the same results. Ultimately this rush to blame or excuse all manner of modern sexist attitudes on evolution is wearing thing and the only thing that surprises me is that these studies continue to get published in peer reviewed journals. Obviously with most anthropologists being men there is a lacking “voice of reason” from women to challenge the flaws in the research (like it’s misogynistic premises).

And most insulting is the Telegraph’s summation of this rather small sampled research project….

The research also shows that women have the same navigational skills as men, if there is sufficient motivation to get to a destination, such as a cream bun.

So there you have it – if you want to motivate a woman all you need is a cream bun. Perhaps one could tactfully suggest the writer of the article Roger Highfield (science editor) enclose certain bodily parts in one and we can test the theory. If he’s right then we get the satisfaction of punishing him for such a sexist attitude. If he’s not then he can rest safely….