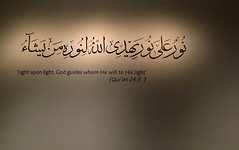 Laleh Bakhtiar, a Muslim feminist Iranian-American is soon to publish a new English translation of the Qur’an.

The new version was conceived at a gathering of Muslim feminists in New York last year, which decided to create the world’s first women’s Muslim council. The focus is on excluding scriptural justifications for the oppression of women.

Bakhtiar argues that choices made during translation can have a considerable impact on the message – the example she quotes is the Arabic word “idrib” which can be used to bean either ‘to beat’ or ‘to go away’. Traditionally, one particular passage of the scripture is translated “And as for those women whose illwill you have reason to fear, admonish them; then leave them alone in bed; then beat them”. Bakhtiar suggests that instead it should instruct husbands to leave their wives rather than beat them and to “let God work His Will instead of a human being inflicting pain and suffering on another human being in the name of God”.

Muslim clerics have called into question Bakhtiar’s command of Arabic, suggesting she may have prepared her new version from a translation rather than from the original, but Bakhtiar insists she worked from the original Arabic text and that – as the daughter of an Iranian man and an American woman who has lived in Iran – she is fluent in classical Arabic.

The new text will be published next April by Islamic speciality bookseller Kazi Publications. Laleh Bakhtiar has already published a number of books relating to women and Islam, and now lives in New Mexico teaching Sufism to immigrant Muslim girls.

Photo by estherease, shared under a creative commons license.