PIs zone in on arranged marriages 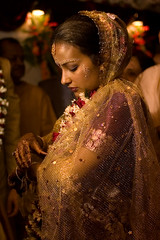 The trend has been fed by the use of internet dating sites to find matches for arranged marriages: “Since people who meet online know little about each other–nor do their relatives–the anonymity offers a huge potential for fraud and deception.”

Because matches found this way – rather than through the parents’ social network – are complete strangers, I suppose it does make sense to try and dig a little deeper – and perhaps this is could substitute a bit for actually getting to know your betrothed. But isn’t there something a bit creepy about this?

A team of several people monitor their target for every second of the seven or 10-day period, dressing up as rikshaw-wallahs, bouncers at a night-club or, as Rana recalls, even a cleaner in their doctor’s office.

“It’s human nature that within a span of seven days, you’ll repeat every habit,” says Rana. “If I have a girlfriend, once a week, I’ll go see her. If I drink, I’ll do it at least once a week. If I enjoy partying and going to clubs, again, I’ll do it at some point in the week. That’s why we do our surveillance for seven days. Within that time, we make the report.”

So, is it all in good sense?

Of the investigations undertaken by Fireball, Rana says about 40 percent of the people they’ve scrutinized have been “very dishonest” about their life and work.

Photo by caitlinburke shared under a Creative Commons license