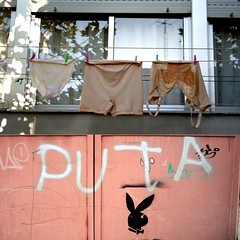 In what may be a bummer for some, the site will be “an exclusive college-only non-nude social network”.

Of course, though, the whole thing is built on Playboy’s pornilicious reputation. Speaking of which, Shameless Magazine has picked up on an interesting quote from an interview with the chair and CEO of Playboy Enterprises Christie Hefner:

“To say you’re not a feminist is virtually the same thing as saying you’re a racist.”

Head over to Racialicious’ comments section for some interesting thoughts on this quote. For example:

The f-word has been demonized by people from just about every political stripe at one time or another. It’s been a convenient scapegoat for everything from sexually active teens, boys not doing well in school, divorce and rape. It’s has a reputation more like Black Power than Civil Rights for the average person: extreme, angry, society changing. This is not to say this is an accurate representation so much as a stereotype though.

Photo by Jorge Mientes, shared under a Creative Commons license