Race and gender in blogland 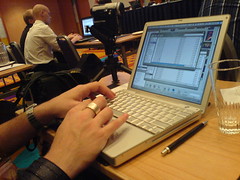 There’s been a bit of noise recently about the lack of diversity in the blogsphere.

It was triggered in part by the lack of coverage of the BlogHer ’07 conference, which brought together 800 women journalists and bloggers. According to Amy Tiemann this is symptomatic of a larger phenomenon:

While a 2006 Pew report found that the blogging population is young, evenly split between women and men, and racially diverse, women still struggle to receive equal media coverage of their online activities.

It was also triggered by criticisms that the Yearly Kos (YKos) conference, which did receive wide coverage in the media when it ran just a few days after BlogHer, was largely male and largely white in terms of speakers, participants and sessions. Even though it was organised by a woman – illustrating once again that having a woman in a space doesn’t guarantee a feminist politics. And even though it was the site of some of the critiquing:

Now, after what’s been a long, low rumble over demography and diversity, a grass-roots rebellion is finally surfacing in the netroots. At YearlyKos itself, home of what Jennifer Pozner described on Huffington Post as the “blustering A-list boys of the ‘netroots’”, there was the panel titled gamely “Blogging While Female”. The question for the panel was this: “The blogosphere was supposed to be a place where gender didn’t matter and voice was all. So what happened?”

Considering the demographics of the blogsphere according to the Pew report then, why might black female bloggers in particular be ignored?

Is Jenn from Reappropriate right? Is it that many blogs are sexist – and presumably racist – spaces through their writers; readers bring their racist and sexist baggage with them when they choose which sites are worthy of engaging with; and black female bloggers are not attending – or not being invited to attend – the mainstream conferences that get picked up by mainstream media?

Or is it that there aren’t enough black female bloggers writing ‘politics’ that reads as Politics with a capital ‘p’? According to the same Pew report, women are more likely to blog mainly about personal experiences. And yet it also states that “many well-publicized blogs focus on politics”.

Perhaps having all of the democratic candidates at YKos made that conference especially newsworthy for mainstream newspapers?

This could be the reason that it is difficult to source British black female bloggers: we are looking in the wrong places, in overtly political places. In fact, I think even the feminist blogsphere in Britain is too political a space to find the colour we’re after. Black British women are definitely blogging, but they’re writing about their lives and daily experiences in a way that is quite dissociated from naming feminism or politics. Which is certainly a contrast to many US women of colour bloggers, who deliberately blog around race and gender as feminists.

How much of a problem is it if women’s blogging, and black women’s blogging, is seen as too personal and not enough, or not the right kind of, political to pay attention to? What opportunities to influence are lost to those of us writing to make change? And what are we going to do about it?

Photo by Jake Bøtter, shared under a Creative Commons license