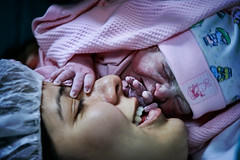 Sweden has a reputation as one of the best countries in the world to give birth. But, according to a new study, the outlook is not so good for mothers born outside the Scandinavian country.

According to the researcher who carried out the study, this is down to racism within the Swedish healthcare system.

Eva Robertson, a researcher at the Karolinska Institute, says that the problem stems from discrimination in the healthcare system.

“There is a form of structural discrimination at play, whereby a patient has to fit into a certain mould in order to receive quality service and be listened to,” Robertson told Svenska Dagbladet.

“There are not many people in the healthcare system who recognize the problem but there are plenty of foreign-born women who experience it,” Robertson told Svenska Dagbladet.

Photo by P!ndaro, shared under a Creative Commons license