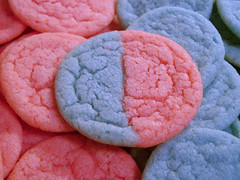 The female love of pink has deep, deep roots, according to research by the University of Newcastle.

The Times reports on a study which purports to trace girls’ and women’s preference for fluffy pinks to “humans’ hunter-gatherer days, when women were the primary gatherers and would have benefited from an ability to home in on ripe, red fruits”.

(First off, red isn’t the same thing as pink! Mattel pink is nothing like any kind of edible berry I ever saw.)

Meanwhile, men and boys supposedly love blue because it “is more likely to be clean and the colour is also an indicator of fine weather”.

How did they come to this shocking conclusion? Did years of archaeological and anthropological research uncover some hitherto unknown evidence about the preference of early humans?

They got a bunch of students and did online tests about what colours they like.

In the study, published in the journal Current Biology, the scientists showed pairs of colours to 208 volunteers aged between 20 and 26, who had to select which they preferred by clicking with a computer mouse.

While most of the participants were British white caucasians, a sub-group of 37 were Chinese. Both groups showed similar sex-related preferences, with women liking blues and pinks while men liked mainly blues. “Although we expected to find sex differences, we were surprised at how robust they were, given the simplicity of our test,” Dr Hurlbert said.

All this establishes, is that there is a preference. Not why it exists. All the researchers have done is taken that non-fact, added a bit of baseless speculation, cooked it up in some gender stereotypes and served it hot. And The Times printed it. So much for scientific rigour.

For girls. Years of training, from their very first babygro, through enough pink toys and pink adverts and pink tv shows and cartoon characters that wear pink and pink stationary and pink book covers and films involving princesses that wear pink outfits to make them begin to dream in pink hues.

For boys. Years of training, from their very first babygro to… um… well, then boys get to play with things made with other colours. Like green. And silver. And red. And yellow. And orange. But never, ever, ever pink. Pink for men is associated with two things: the Financial Times and being gay. And in our homophobic, gender-constrained society, that’s a pretty big influence.

But these researchers obviously think it’s much more likely that the preference is down to evolution.

Photo by Esther17, shared under a Creative Commons license