Few phrases are quite so boring, misleading, or overused as the phrase ‘size-zero debate’. I mean, what exactly is it that people are supposed to be debating? Everyone, it seems, is agreed on the essentials: ‘size zero’, for most women, is far too thin (not to mention the fact that what we really mean is ‘size four’); it’s better to be healthy than unhealthy; it’s better to be happy than unhappy; it’s rarely in anyone’s best interests to look like a water-retentive buffalo, but then again, why starve yourself to look like a prepubescent boy? It’s tedious stuff. Every cliché in the book of clichés has been used again and again, to the point where journalists have little left to do but moan on about how monotonous it’s getting – baiting the debate has become as much a banality as the ‘debate’ itself. After all, thinking up different ways to describe collarbones is a game you can only play for so long, before your brain stem starts to rot and you switch on The Simple Life instead. 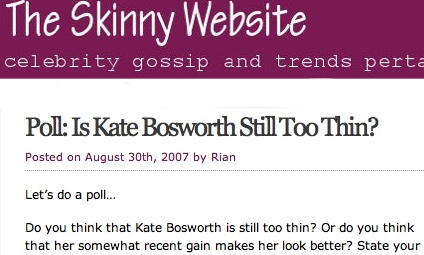 And yet our collective fixation refuses, like baby-weight, to budge. When Heat magazine ran twelve consecutive ‘skinny celebrity’ covers, its sales figures sky-rocketed. When someone realised this was money-making wizardry, other magazines followed suit. There is even a website (www.theskinnywebsite.com), which, describing itself as ‘celebrity gossip and trends pertaining to weight, diet and exercise’ is bombarded with 50,000 page hits every day. Interspersed with Google ads for ‘pro-mia bracelets’ and ’emotional eating’ treatments, this website is to gossip mags what hardcore pornography is to Carry on Camping. Photographs of celebrities are posted, and hordes of gleeful commenters rush in to bitch about the find. To take a random selection of comments: ‘OmG sHe Is SoOoOoOo FaT!!!!!’, ‘Her legs are terrible! The girl has cankles!’, and ‘Look at her lower tummy. It’s poochy…like an old lady’s’. If I tell you that the target of this particular onslaught is the tremendously slender Mischa Barton, a girl whose tummy is no closer to being ‘poochy’ than mine is to being a nuclear warship, then you get a sense of the sort of derangement we’re contending with. Worse yet is the cattiness reserved for Mel ‘Sporty Spice’ C: in response to her admission that she has a history of eating disorders and may have done permanent damage to her bones, one comment makes the snide remark: “She’s making up excuses so people won’t criticise her for being fat now.”

It’s easy to dismiss such sniping as playground idiocy – the extra-curricular stupidity of a small number of ill-educated and objectionable teenage girls. But people read this stuff. People who really should know better. Realistically speaking, none of us cares one iota what Britney’s cellulite is doing these days. Why should we? Until she actually amputates a chunk of it and sends it to us anonymously in a brown paper envelope, it isn’t impinging on us. Equally, no-one gives a flying flip whether so-and-so celebrity is pregnant, or full up, or merely breathing out. But, however we justify it to ourselves – whether post-modern irony or pop-culture curiosity or simply boredom – we read this trash all the same. We read it gluttonously and compulsively, and when we’re sated we feel soiled and slightly grubby, and resolve not to waste our time on it again. At least until next Tuesday, that is, when the next spate of weeklies fills our stands.

Calling it ‘the size zero debate’ obfuscates what’s really going on. This is not about what size women ought or ought not to be – this is about the fact that women feel they ‘ought’ to be anything at all

“Celebrities who used to be fat and now are skinny!”

“Celebrities who used to be skinny and now are fat!”

“Celebrities who love their curves!”

“Celebrities who hate their chunky thighs!”

“Celebrities who are powerless to defend themselves against the massive oncoming tide of obesity to which you too will succumb if you don’t follow our exclusive new diet plan!”

(OK, so those last few are reading between the lines, but I’m sure you get the picture)…

Here, you’ll find more mixed messages than at a postal sorting office for the blind. Whether a celebrity is deemed to be thin or fat will depend on which magazine you’re reading, and whether said thin/fat figure is deemed to be good or bad will depend on what’s being promoted. ‘Curvy’ – which can be euphemistic for ‘needs a gastric bypass’, or shorthand for ‘size 4 with silicon breasts’ – has no meaning whatsoever: all we can garner from these magazines is that men are supposed to like it and women are supposed to be it. (Every magazine purports to be anti-size-zero after all, and, if you look very closely, believes itself to be bucking a trend.) You’ll find adverts for diet products next to ‘body-positive’ interviews with invariably ‘curvy’ celebs; you’ll find page-spreads of pin-thin models, close to self-righteous chastisements of celebrities the same size; you’ll find that celebrities’ supposed weights, and even heights, will oscillate insanely from one magazine to the next (is Lily Allen 5ft2 or 5ft6? is Keira Knightley a 00 or a 12?); and you’ll find that these magazines tell you nothing but that the female body is an object to be judged.

Judging each others’ bodies is our prerogative, we think, given that we’re so brutal about our own

There simply isn’t a market in objectifying men in this way. Sure, every so often these magazines will include a token bloke with a paunch (theskinnywebsite has ‘male celebrities’ sandwiched in between Lindsay Lohan and Mandy Moore), and it looks like men are starting to face similar pressures to women, given that male eating disorders are on the rise. But nobody – neither men nor women – is interested in mauling men in the same way that women tear at each other. Judging each others’ bodies is our prerogative, we think, given that we’re so brutal about our own.

What is needed is awareness, resilience, a more-than-occasional reality check, and, in the case of the girls who called Mischa Barton ‘fat’, a trip to the opthamologist

The ‘size-zero debate’, and the thousand magazine spreads it has spawned, is a genius stroke of marketing. In the same crude way that sex sells, skinny-porn sells, for in an industry bloated with sensationalism, flushed with garish colours and festooned with headlines of the “my brother gave birth to a frozen chicken and I’m the father” variety, the more voyeuristic a picture or caption the more profitable. The reason they keep on churning this stuff out is because we keep on buying it. And the reason we keep on buying it is because our self-esteem has already been eroded by umpteen other articles which showed us exactly the same things.

Ways out of the tangle? I suspect that websites like this one are a good way to begin. What is needed is awareness, resilience, a more-than-occasional reality check, and, in the case of the girls who called Mischa Barton ‘fat’, a trip to the opthamologist. The bloggers at Jezebel have the right idea. In a recent take-off of ‘celebs and their cellulite’ style magazine covers, they compiled a mock-up cover containing pictures of their own cellulite. Imperfect, normal, proud – and not a bit of schenfreude, or refracted insecurity, in sight. They serve as a shining and delightfully dimpled example to us all.

As it stands, however, I’m going to the newsagents.

Abi M is a 21-year-old recent graduate. She gets through far more chewing gum than is necessary