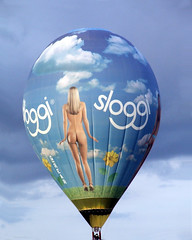 Underwear maker Sloggi has outraged many Swedes, with a competition which revolves around finding “the world’s most beautiful bum”, reports The Local.

As far as I know, the same campaign has received exactly zero attention in the UK.

Users on the website showmeyoursloggi.com are invited to vote for the bottom that most tickles their fancy, with the the owner of the winning backside being offered a cash prize as well as the opportunity of becoming Sloggi’s next model.

After having a quick look at the site, I feel a bit ashamed of owning quite so many pairs of Sloggi pants.

Indeed, this stuff is so commonplace now, that the company didn’t even predict a negative response:

“We are surprised by the negative reaction we have had in Sweden,” marketing manager Sofie Lindahl-Jessen told The Local.

“We have been running the campaign for one and a half months in 39 countries around the world and Sweden is basically the only place we have had negative feedback,” she added.

Photo of another Sloggi promotion by magpie967, shared under a Creative Commons license