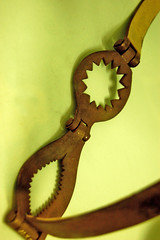 The Daily Mail has profiled six women who, as the newspaper puts it, haven’t had sex for a combined period of 33 years.

We live in a promiscuous society, but many women are choosing celibacy. Dismayed with modern attitudes to sex and the prevalence of sexually transmitted diseases, abstinence movements such as The Silver Ring Thing are gaining favour.

And here’s the reality: six women with completely different reasons for not having sex, only one of which has anything to do with avoiding so-called ‘promiscuity’. One is too busy to have sex with her boyfriend, one is a foster parent who wants to focus on taking care of her children. One has a condition which makes sex extremely painful. Another woman went through early menopause and lost her sex drive – but now has it back again, and is actually getting back into the idea. Not exactly evidence that women are turning away from all that dirty sex stuff because they’re good girls, is it?

Actually, some of them have quite interesting things to say about the nature of the relationships they’ve been involved in:

The longer I’m on my own, the more I enjoy the independence. I can focus on my work and see my friends, and I’m free of commitments.

I’m scared of having a relationship now – if I start sleeping with a guy, then he might curtail my freedom.

Unfortunately, the same woman says this:

I think being promiscuous can damage your self-esteem, as well as your health.

Promiscuity is one of those words I’d happily wipe from the dictionary: its existence says more about social encoding of the idea that only ‘bad’ girls like sex than it does about anything else. Which is clearly exactly the agenda that the Daily Mail is pursuing.

It would have actually been interesting to see these interviews run in the paper without the virgin/whore claptrap the Mail saw fit to add – even though it wasn’t reflected in the words that the majority of the women used to describe their reasons for staying celibate. What about all the celibate men? Like chastity belts, this “new wave” of celibacy obviously only applies to women. It’s the same old misogynist claptrap, with another name.

Via Jezebel, which notes:

Photo by Curious Expeditions, shared under a Creative Commons license