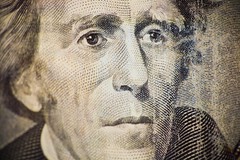 There are plenty of reasons to diss fashion mags (I can’t quite bring myself to call them women’s magazines). But one of the easiest is the consumer fantasy they embody, a fantasy which is way out of pretty much everyone’s league to live out.

Although it seems like an obvious point, you’ve got to give Jezebel credit for coming up with a new way to reveal how true this really is. They’ve gone through the September issues of Elle and Vogue, adding up the cost of everything promoted within. As they put it, the idea is to see which is “full of the most shit”.

It kind of helps to put it all in perspective, that you would have to spend nearly $74 million (about £35 million) to buy the Elle lifestyle. And that’s for one month! That shit changes every issue.

Photo by Thomas Hawk, shared under a Creative Commons license