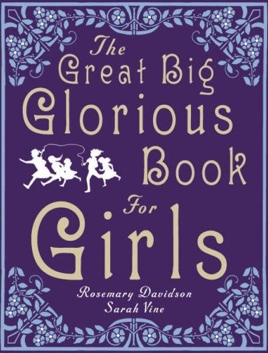 The Dangerous Book for Boys is a guide to war games, conkers and catapults interspersed with potted biographies of the likes of Horatio Nelson. It has been selling massively for the last year, spawning numerous imitators. It was celebrated by the likes of the Daily Telegraph for its rejection of political correctness and back-to-basics approach, and criticised strongly for excluding girls and indulging in gender stereotypes here at The F Word. So how does the version aimed at girls stack up?

Last month, a feminine equivalent was published. Authored by Rosemary Davidson and Sarah Vine, The Great Big Glorious Book for Girls insists on separating young people along gender lines. It is written in a ‘jolly hockey sticks’ style that grates like fingers down a blackboard. There are aspects of this guide to games, etiquette and friendships that are simply laughable, and others that cross the line to become offensive in their regressive and reactionary nature. While not missing the humour, nor with any desire to rain on the parade of any young women that have enjoyed this book, I think it worthwhile to take an objective, rational look at what this spate of books for girls tells us about our current cultural climate.

Firstly, the authors assume that girls’ interests revolve around things like astrology, palm reading, tea-leaves, pom-poms, horses and ponies. They state at the start “Obviously today’s women know all about the internet and computer games, and most can text 100 words a minute while programming the DVD player – but they all still thrill at the sight of a pony, and will spend hours experimenting with glitter paint”. This sweeping generalisation locks girls into a rigid stereotype to the exclusion of all alternatives, and is utterly patronising in its attempt to convince us that they are thoroughly modern, with-it women.

Feminism gets one mention in the entire book, when the authors claim that all women were once skilled at needlecraft until “equality and feminism” came along and made sewing unfashionable. One gets the impression throughout that Davidson and Vine see the world in very strict, rigid gender lines and regard all this trendy feminism as bothersome and simply getting in the way of everybody’s enjoyment.

This is an exclusively middle-class, heterosexual social universe we are dealing with here. To be a proper girl, it implies, you must be feminine, girly, straight – at one point readers are warned “marry in May, and you’ll rue the day” – and enamored of the male sex.

Not only are boys and men unemotional, inexpressive and uncommunicative, but it’s not their fault – it’s the way nature made them. You’re not to expect a Valentine’s card from a boy (apparently boys think they are “soppy nonsense”), but of course you want one. All girls want one. They all want romance, a boyfriend, a husband. Indeed, the choicest quotes come in the section that deals with ‘boys’.

The book is not simply sexist, but a vindication of every regressive, tired cliché we’ve ever heard against feminism

Apparently, boys like ‘doing’ things and girls like ‘feeling’ things. Boys are not to be held responsible for their lack of emotion, as “expressing emotion comes as naturally to a boy as ballet does to an elephant”.

It’s at this point that the book ceases to be merely an amusing anachronism and starts to be, not simply sexist, but a vindication of every regressive, tired cliché we’ve ever heard in arguments against feminism and gender equality over the years. Do most young women believe this to be true, or will they laugh at it? I honestly don’t know. But this is the anti-feminist backlash being made palatable to girls of school age.

They are instructed to spell out their feelings to boys, as males are apparently genetically incapable of sensitivity. If a boy upsets you, it won’t be on purpose, and he’ll be genuinely surprised that you’re upset. How incredible – having testicles is a license to be as insensitive, thoughtless and selfish as you like. It makes me wonder about the authors’ marriages and the way they are raising their children.

However, it’s not all doom and gloom – the section on boys finishes by stating that boys will “carry your books for you”. Those cumbersome textbooks are just too heavy for girls’ delicate, pink little hands to manipulate.

To be fair, the book is peppered with “inspirational women”, name-checking women in history in little potted hagiographies, and some of these are genuinely important and admirable women – Rosa Parks, Virginia Woolf, Aung San Suu Kyi. However, the morsels of information offered are often laughably trivial. Boudicca had long red hair and piercing eyes; Aung San Suu Kyi always wears a flower in her hair; Elizabeth I wore frocks, ruffs and jewels. No mention, of course, of Rosa Parks’ communism or Woolf’s bisexuality. Emmeline Pankhurst is eulogised, but nothing of her Marxist daughter Sylvia.

Okay, maybe I’m expecting too much from what is essentially a children’s book. But the anti-feminist backlash is very real, and the current generation of girls face many new issues, questions and problems that such a book could tackle head-on in a witty, non-patronising and empowering way (is this being done elsewhere? I’m not sure).

There are also, in many respects, greater prospects for young women’s freedom, independence, self-expression. Why not cover things like ‘how to form a band’, or profile female artists? Why not cover safe sex, abortion or intelligent relationship advice? Why not – gasp – acknowledge that not every female is white, middle-class, heterosexual, and overtly girly? If the book must be stuffed full of Enid Blyton-esque drivel, why not at least offer tips on making catapults and other weapons, like the boys’ equivalent?

I’ll freely admit that I abhor the entire concept of having gender-specific books and toys. But I would have been willing to view this tome sympathetically if it had anything useful or of merit to offer.

All we see here is a strong indication that our culture is sliding backwards towards separation of the sexes and a return to traditional gender roles, while the white middle-class still dominate and dictate our desperately dumbed down popular “culture”. I’m scared.

Paul Brown is 33 and lives in north London. His work deals with homophobic and racist hate crime, and his main interests are Tracey Emin, feminism, socialism and Poppy & the Jezebels