The life of a Hong Kong maid? 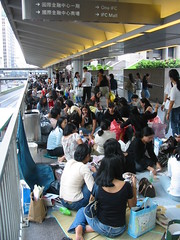 The BBC investigates the mistreatment of Filipino women when they go to Hong Kong to work as maids, as part of a series called Maids: The Untold Story

You can download part one of the series here.

In particular, the radio documentary looks at maids that are abused, abandoned by their employer when they become ill, and generally have a really horrible time of it. The statistics on maid suicides – which the BBC suggests may conceal a number of murders – are really horrifying.

Once their employment is terminated, domestic workers must leave Hong Kong within two weeks – or prove that they were abused, a pretty tall order.

Photo by ElphHK, shared under a Creative Commons license