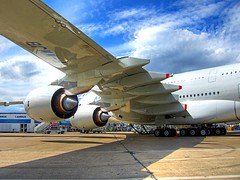 Women are subject to discrimination in the workplace, but for women from ethnic minorities the problem is often worse, as racism and religious and cultural ignorance come into play as well.

Pickled Politics points to this feature in Personnel Today about some of the persistent myths black and ethnic minority women have to deal with, and some of the employers making efforts to address the problem.

Here’s a taster of how this discrimination works in practice:

When Shabana Kosar was asked at a job interview: “Does being a Muslim prevent you from being allowed to work alongside men?” she was speechless.

Yeah, no kidding she was speechless! Some of the discrimination is less obvious, but just as insidious. Later on, the magazine quotes an engineer working for Airbus UK:

“I’m a 5’4″ Muslim woman with a scarf, so people expect me to be quiet,” she says. “But I’m confident, assertive and self-assured, which does shock some people.”

The feature also goes some way to sketch out the scale of the problem:

Kosar now works for the West Yorkshire Fire Service, which it seems has gone some way to try and address its issue with recruiting ethnic minority women.

“We designed a policy looking at things such as the needs of these women, in terms of clothing and jewellery, right through to ensuring our own staff were trained in myth-busting,” says Maria Tonks, the service’s equality and diversity manager…

Kosar agrees. “During the interview, I was told the fire service was quite happy to introduce a shalwar-kameez if I felt the need to wear it. The uniform was later designed by myself and a colleague and introduced to the brigade,” she says.

Photo by NguyenDai, shared under a Creative Commons license