Jessica Valenti of Feministing posts about a new term in the misogynist lexicon: tramp stamp. This is apparently a term for lower-back tattoos. I have a “tramp stamp”, although it’s not my favourite tattoo and will soon be transformed into something else: 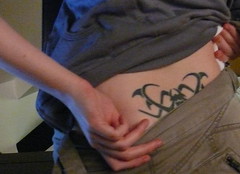 The term is being bandied about by Debbie Schlussel, who illustrates her post with a photo of a lower-back tattoo tagged: “Easy and now at risk to her baby”. Because Schlussel is going for the double whammy: promoting sexist terms like “tramp” and “easy” that are used to try and make women feel shame about sex, and promoting the myth that lower-back tattoos make it dangerous to get an epidural during childbirth.

Meanwhile, in other tattoo-related news, the Discovery Channel is launching London Ink, a reality TV show about a London tattoo shop. Unlike the LA-based version of the show, the London programme features only one woman. So, unfortunately, there will probably be less musings on being a woman in a male-dominated industry. There’s also still time to make an appointment with one of the artists at the London Tattoo Convention in October.