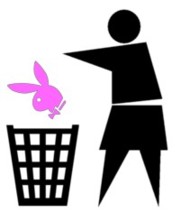 Well, the good news is that a humour-based campaign is underway to oppose and protest the store. Bin The Bunny has a blog, where you can read more, but the campaign will involve an ongoing protest once the store opens, and lots of fun antics with a bunny suit.

The activists involved have also produced three short films: ‘A Nightmare on Oxford Street‘, ‘Interview with the Rabbit‘ and ‘The Rabbit Strikes Back‘.

This is the spine-chilling tale of a giant pro-feminist Rabbit’s journey into the dark underworld of Playboy Enterprises. It will change the way you look at Playboy. Forever.

From October, the campaign will also be selling rather fabulous-looking t-shirts featuring the Bin the Bunny logo (above).