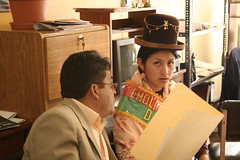 Can clothes be feminist? Bolivian women are giving it a good go, adopting a ‘cholita’ look worn by Aymara Indian women, reports Kansascity.com.

The seemingly anachronistic style, cribbed from the closets of La Paz’s Spanish colonizers, is the daily dress of many of the city’s older women. But a growing number of their daughters and granddaughters are celebrating a flashy urban update of the outfit.

Their look makes a powerful — and expensive — statement of native pride, hardworking feminism and economic muscle.

Interestingly, the article attributes the move to the rise to power of Evo Morales, who has appointed a number of Indian women to Parliament. Even more interestingly, it’s not middle class women taking on this image, but working class women – the website interviews a cleaner.

The costly cholita outfit — Tito makes just $125 a month, but her full ensemble, jewelry included, runs $400 or more — is also meant to show off the indigenous woman’s seat at the center of La Paz’s economy.

Cholita-run stands sell every possible good on every city street. Cholitas cook the city’s food, clean its houses, bathe its children — even swing pickaxes on its road crews.

Photo by marulloama, shared under a Creative Commons license