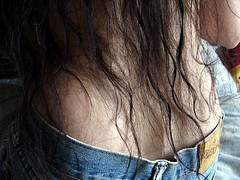 You may have read reports about some research purporting to prove that Jessica Alba “has the perfect wiggle”. It was covered in the Telegraph, for example.

“A team of Cambridge mathematicians” apparently “found that it is the ratio between hips and waist that puts the sway into a woman’s walk – and the nearer that ratio is to 0.7, the better”:

This ratio provides the body with the right torso strength to produce a more angular swing and bounce to the hips during the walking motion.

Therefore, a woman with a 25in waist and 36in hips would have just the right proportions to carry off a sexy swagger as she walks.

AfterEllen speculated that the research was “an excuse for a bunch of math nerds to look at pictures [of Alba, etc] and call it serious research”. And I could start unpicking it further. But, it turns out, that would be pointless. Because Ben Goldacre of Bad Science has revealed that the ‘research’ was most-likely made up by a marketing firm, which paid scientists to come up with an “equation” on demand, and provided him with the results of a survey meant to back it up – before they actually carried it out. He was approached about the story back in June:

I replied immediately. “Are there any factors you would particularly like to have in the equation? Something sexual perhaps?” “Hi Dr Ben,” replied Kiren. “We would really like the factors of the equation to include the thigh to calf ratio, the shape of the leg, the look of the skin and the wiggle (swing) of the hips… There is a fee of £500 which we would pay for your services.”

And there was survey data too. “We haven’t conducted the survey yet,” Kiren told me: “but we know what results we want to achieve.” That’s the spirit! “We want Beyonce to come out on top followed by other celebrities with curvy legs such as J-Lo and Kylie and celebrities like Kate Moss and Amy Winehouse to be at the bottom e.g – skinny and pale unshapely legs are not as sexy. I will find out when we will have the results of the survey for you. Are you pretty free this month to work on it?”

So. Clarion Communications do a survey, but they’ve already decided what the result is, beforehand. Then they employ Professor Weber. Then they have the gall to put out a press release with the headline: “Jessica Alba voted sexiest walk: with the figures to prove it.” Nice. Who does their surveys for them? It was an internal email sent around the company.

By co-incidence, it fits perfectly with what some marketing friends of mine were telling me about made-up-research just last night. Well done to Goldacre for exposing this garbage.

Photo by W2 a-w-f-i-l, shared under a Creative Commons license