Get your toe bypass here

What would we do without cartoonists to take our politicians down a peg or two?

The most talented cartoonists direct an acid and cynical eye at the foibles of the powers that be. Without the likes of Steve Bell, our elected representatives would barely be able to get their collars around their necks, so bloated with hubris would be their heads.

Mikhaela Reid is surely one of the most talented cartoonists out there right now, and best of all, she directs her mocking pen towards our sexist, racist, homophobic society. That’s not to say she doesn’t target politicians. She does. Who could forget ‘Dick Cheney’s Super-Duper Quick + Easy Guide to Solving Problems With Torture’?

Although Reid’s cartoons have appeared in The Guardian, UK readers have so far had limited access to the the Boston-based artist’s work. But no more – it is now possible to buy a collection of her cartoons, spanning her career from high school to successful, syndicated cartoonist at the age of 27.

“I hope the next election will bring a reasonably less evil leader, so I can relax and write more jokes about relationships and fashion, but I’m not holding my breath,” she writes in the introduction to Attack of the 50ft Mikhaela.

Like all the best political cartoonists, Reid is willing to get a bit disgusting. She is particularly good at lurid illustrations of the contradictory messages we all ingest about the quest to become the perfect woman.

The most biting example is surely the ‘Your Yucky Body’ series. In one of these satires on the women’s mag staple, she draws a ‘toe bypass’ – where she shows a big toe amputated from its usual place and attached to the heel of the foot, to create a permanent high-heel. In ‘belly-dectomy’, the crazy for tummy-tucks is taken to its logical conclusion, and Reid depicts a woman with her entire stomach removed, and her guts falling out. Underneath, she writes: “Even the flattest tummy is just inherently icky!” 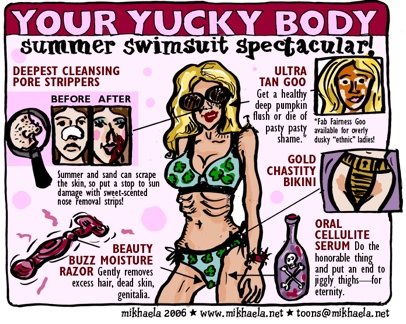 Sometimes, surrounded by images that reinforce the idea that one, particularly narrow version of beauty, is all women have to strive for, it takes someone like Reid to help us understand just how oppressive they really are. Poking fun at the magazines that enforce beauty standards, then pretend to push the message that everyone should love their body, she says: “Embrace diversity! Women of every shape and colour can become marginally less ugly if they spend lots of money!”

But not all of her cartoons are based on shock tactics. In ‘Did you hear the one about the gay cowboys?’ (referring, of course, to the film Brokeback Mountain), three men sit around discussing the film in a bar. “Dude, we heard your girlfriend forced you to see ‘Butt-Pirate Mountain!’,” says one. The second one replies: “What’s next, a movie about man-horse love?” “Oh yeah? Well I’d rather chew off my own-“, says the first. The third interrupts to say: ” Actually, I thought it was a really nice love story.” Silence. “Man, some people have no sense of humour,” says the first.

And there you have it. I hate to take away from the cartoons by analysing them too much, but with no gory images, Reid paints a succinct and adept satire on homophobia – and the way homophobic banter is excused and dismissed.

Most of the time, as with any good cartoonist, her work won’t exactly make you laugh, so much as force you into a horrified-but-amused grin. But some of the drawings are just plain funny: ‘Bush vs My Cat’, for example, in which she tots up the US president’s merits compared to her feline. It turns out they have a lot in common. Bush has an “extremely limited vocabulary”, to kitty’s “complete lack of vocabulary”. Bush “chokes on pretzels, foreign policy”, while the cat “chokes on electrical cords, rubber bands”. But things go downhill for both of them: Bush “makes whole country pay for giant illegal war”, while Reid’s cat “makes me clean piles of half-digested hair and shoelaces”. Who’s worse? You decide.