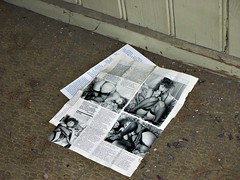 Bad days I have had. But not that bad.

…because the Gag Factor series of films, in which women are turned upside down and choke-fucked until their faces are covered with drool, semen and barf (Adult Video News Award Winner, “Best Oral Series”), is now up to sequel #22. Because the Slap Happy series, in which a male performer only pauses from asphyxiating the starlet with his penis to slap her repeatedly across the face and verbally abuse her, is up to sequel #13.

He has some more horrible examples:

A few men who appear to be in their 20s drive around in a minivan with a video camera. They ask women if they want a ride. Once in the van, the women are asked if they would be willing to have sex on camera for money. The women do. When the sex is over, the women get out of the van and one of the men hands the women a wad of bills as payment. Just as she reaches for the money, the van drives off, leaving her on the side of the road looking foolish. There are trailers for 10 videos on the website. All appear to use the same “plot” structure.

The pornographers are not a deviation from the norm. Their presence in the mainstream shouldn’t be surprising, because they represent mainstream values: The logic of domination and subordination that is central to patriarchy, hyper-patriotic nationalism, white supremacy, and a predatory corporate capitalism.

No doubt this does play a part, but I’m not sure it provides a full explanation. After all, has society got that much more patriarchal in the last few years? Really? It might not have got better, but has it got worse? Or is it a part of a backlash against a world in which a man is more likely than ever to confront strong, independent women in real life?

Photo by flickroli666, shared under a Creative Commons license