More women than men own consoles 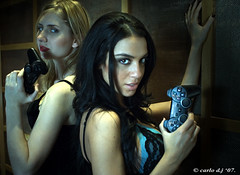 More women than men own games consoles such as the PlayStation, Wii and Xbox, according to a survey reported in MediaPost.

ARE MALE VIDEO GAME ENTHUSIASTS actually outnumbered by their female counterparts in the U.S.? Do most of the Xboxes, Wii’s and PlayStations in this country actually belong to women? Conventional wisdom would say no–but a new survey from JWT suggests otherwise.

Granted, the figures – 44% of US women said they owned a games console, compared to 39% of men – were based on an online survey, but is that tone really necessary?

As one of those wacky console-owning women, this type of survey is extremely welcome. If only to persuade the games industry to stop making games like Dual Love (a streetfighting game, but instead of playing one of the fighters, you are a female groupie who progresses by cheering on the male players during their fights, then wiping them down in the locker room afterwards), or Imagine Babyz (“Take on the challenge of raising a baby throughout all stages of development”!), not to mention advertising their consoles soley to men, in the most sexist way possible.

Photo by introspectrum, shared under a Creative Commons license