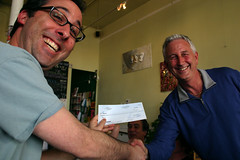 It has not been a good week for the struggle for equal pay.

According to research from the Chartered Management Institute and from Remuneration Economics, the gender pay gap for managers of all levels across Britain has widened for the first time in 11 years, growing from 11.8% to 12.2%. And the gap is even larger for those at more senior director levels. That’s a loss of earnings of more than £6,000 pounds a year just for being female.

This is in spite of the fact that the research also found that female managers are being promoted faster than men and are more likely to receive bonuses. Why is that you ask? Two reasons: the bonuses make up a smaller proportion of women’s take-home earnings and the actual bonus amounts are almost 50% lower than men’s. That is, the bonus for being a man is large and can significantly augment your regular income.

It’s no wonder then that we also learned this week that there was a 155% increase in the number of equal pay claims lodged in employment tribunals last year. If more women knew about the pay gap, this rate would probably be even higher.

None of this should come as a surprise since the Guardian survey of the 100 largest companies on the Stock Market last week fairly predicted the news: there were only two female chief executives in the whole list and their salaries were 25% and a whopping 75% less than the average of their male peers.

In response to the backwards progress on managers’ equal pay, the Government promised to press forward on its ‘commitment to reduce the pay gap between men and women’ which I eagerly await. If it chooses to, the Government could actually be at its boldest ever on this agenda in the coming months: it is currently conducting a major review of our existing anti-discrimination laws (handily called the Discrimination Law Review) with a view to developing a new Single Equality Act. This is a once in a generation chance to update our 30 year old sex discrimination legislation and really make a difference to women.

But we all need to get active if we really want to secure equal pay in our lifetimes. And here’s how: in addition to campaigning on its ideas for how our equal pay laws could be reformed as part of the discrimination law review, the Fawcett Society is coordinating a day of action on Tuesday 30 October called Women’s No Pay Day.

Currently sitting at 17%, the full-time gender pay gap means that women are paid 83% of men’s wages, which is the equivalent of only being paid until October 30th while men get paid to the end of the year. Women’s No Pay Day will thus be a chance to send a strong message to Government that this scandal of unequal pay needs clear action right away – on the very day that we start working for free.

Photo by Cirne, shared under a Creative Commons license