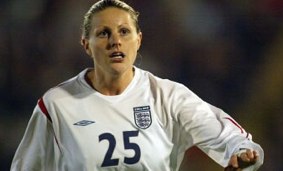 Could it be that women’s football is becoming a bit mainstream? Maybe this has been going on for ages, but yesterday was the first time I’ve seen a game make it to the evening news. And the commentator was naming the England players like, well, everyone knew who they were. Like men’s football, in fact.

Unsurprisingly, perhaps, this co-incides with the England team making it into the quarter finals after beating Argentina 6-1.

For example, they dug out this horrible quote from the Guardian:

The traditional male sneer is to compare women’s football to monkeys playing tennis, but this is wrong and unfair. These days it’s more like watching weak men playing football; or men who aren’t very good at football playing football.

I was working at another national newspaper on Friday (I’ll omit the name to protect myself, if that’s OK), and as I switched one of the television sets over to BBC2 to watch England v Germany, one of my colleagues said to me: “The problem I have with women’s football is that it’s just not very good.”

I, unfortunately, still can’t work up any enthusiasm for football played by anyone, but I will do my bit by calling the stuff that’s usually on the telly “men’s football” from now on.