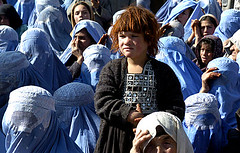 A local Afghan TV station is broadcasting a low-budget version of ‘America’s Next Top Model’, challenging the traditional attitudes that still hold such sway nearly six years after the Taliban was ousted from power.

Four girls in brightly colored traditional costumes with baggy pants and long loose-fitting shawls and headscarves strode down the impromptu catwalk decked out in traditional Afghan rugs. Seemingly less confident than their Western counterparts, they avoided the gaze of the all-male film crew and press.

Although modelling seems like a bit of a problematic career choice in the UK, these are tough, smart women, and we should applaud what they are doing:

More than 10 other models due to take part in the program failed to turn up after hearing that members of the international press would be present, fearing the wider broadcast of the show could lead to trouble for them, their friends said.

You only have to check out this quote from cleric Abdul Raouf to see why:

“Not only is it banned by Islamic Sharia law, but if we apply Sharia law and to take this issue to justice, these girls should be punished.”

But, still, the best bit about this story is that the new TV programme is the creation of an 18 year old woman. Yahoo just sort of slips this fact in, but to me this also speaks of real promise:

“I was really enthusiastic to make this program because I wanted the girls to present the clothes and themselves,” said Sosan Soltani, the 18-year-old director of the program.

“Afghanistan is free and these girls are the future of this country,” she said.

Photo from lakerae, shared under a Creative Commons license