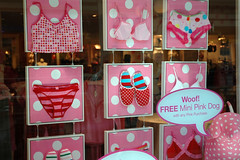 A trader at the hedge fund SAC Capital is suing another trader for sexual harassment, reports CNBC.

This is a really weird case: the trader alleges that his boss(?) required him to take “female hormones” (we must presume this means estrogen, although men also have the hormone in their system). Why?

[Trader 2] came to him and told him he had a trading method in which his traders must not be too aggressive; that traders must be more effeminate and to do so, he directed [Trader 1] to begin taking female hormones

OK, so we already have one hedge manager telling the other one that they need to be less aggressive, and thus more “effeminate” (because women are never, ever aggressive). It gets worse:

[Trader 1] then alleges he suffered emotional and physical distress. The hormones, he says, caused him to begin wearing women’s clothes. He also could not perform sexually with his wife, who wanted to have a baby.

Now, I’m not sure what the evidence is for estrogen preventing men from “performing sexually”. It may give men breasts, as Alan Turing discovered. But I’m willing to bet the hormone has absolutely sod-all to do with an urge to wear women’s clothes. Because clothes have nothing to do with hormones! I mean – WTF?!

I’m not saying that, if this is true, the trader wasn’t treated horrifically. Indeed, there seem to be more details that have not been revealed to the public. Yet it is dangerous and damaging to further embed this idea that women “naturally” (or hormonally?) want to wear pink frilly things.

Meanwhile, Killer Betties reproduces a news story on research showing that parents are more likely to ban their girls from playing so-called ‘hardcore’ video games than their boys.

While nearly half of parents/grandparents (48%) to children aged 14+ say they do not allow their child/grandchild play hardcore games, 60% forbid girls from playing hardcore games – compared to just 37% forbidding boys.