The media has failed women’s football 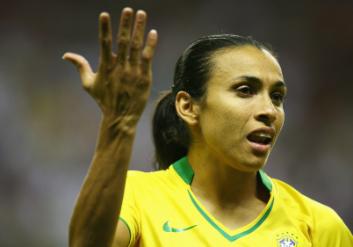 Did you watch any of the women’s World Cup? Chances are, if you’re in the UK, you didn’t. The England games attracted a mid-afternoon audience of around 1.8 million on BBC2, which is respectable for the time-slot, but hardly earth-shattering. Nor is it an ideal position in the schedules for a profile-raising campaign.

You probably won’t have read much about it in the papers either. A paragraph previewing the game against Germany, maybe? A few lines after Hope Powell’s girls got knocked out of the tournament? Unless you actively sought it out – and it would have taken a lot of action – it’s unlikely you’ll even have seen the scandalous scenes when England’s Kelly Smith took off her boots after scoring. Imagine!

Women who want to kick a ball around put up with the inevitable taunts of “dyke” and oh-so-funny jokes about “chesting the ball” and “swapping shirts at the end”, while their greatest triumphs will be compared with men’s – and derided regardless

The BBC posted a blog piece after the opening game of the tournament about how poor the standard of women’s goalkeeping is. The Guardian ran an article after the final, ostensibly to praise the silky skills of Brazil’s Marta Vieira da Silva – known simply as Marta, but its direct comparisons between men and women just provided a space for opponents of women’s football to voice their views. Again.

It gets tiresome repeatedly wheeling out the same defences of the women’s game – amateurism, lack of funding, the fact that women were officially banned from playing football across the world until very recently – but some of these points need reinforcing, as the nay-sayers carp on about how very embarrassingly bad the standard is.

However, when it emerged that six out of 10 Britons would not be motivated to exercise even if their lives depended on it,

I couldn’t help but think that it’s hardly surprising that women don’t participate more when the entire culture of sport is so very male-oriented. Women who want to kick a ball around will have to fork out for kit and meet a fair proportion of their expenses even if they reach the highest level; they’ll have to put up with the inevitable taunts of “dyke” and oh-so-funny jokes about “chesting the ball” and “swapping shirts at the end”; and their greatest triumphs will be compared with men’s – and derided regardless.

Media coverage would attract more fans and more sponsorship, which would mean more money all round

It’s not just a British thing, though. You’d think Brazilians, with their footballing tradition, would be proud to declare the brilliant Marta a daughter of their country. Except they’re not. Her biographer couldn’t find a publisher and Marta plays professionally in Sweden, not her home country.

I’m pretty sure that none of the international footballers care all that much about what is written about them, but if the women’s game got a fairer crack of the whip, the media coverage would attract more fans and more sponsorship, which would mean more money all round. Investment in facilities and training would raise the ability levels and make for a more entertaining and competitive spectacle. And wouldn’t that be best for everyone – particularly if the critics do genuinely wish to watch a high-class battle between two teams of supreme athletes?

Of course, there’s always the possibility that some people just don’t think women belong in the world of association football, whether it’s males or females on the pitch. But that’s another debate entirely.

Photo of Marta from Kickster

Carrie Dunn is a freelance journalist and editor of Kickster, your one-stop shop for anything and everything to do with women’s football and women in football. She is currently completing a PhD in female sports fandom