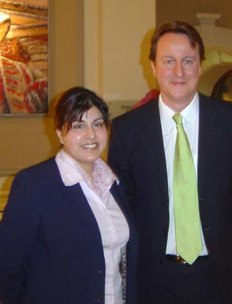 Laylat al-Qadr – the night of power – is considered to be the most powerful night of the year for Muslims. Occurring within the last 10 days of Ramadan, it is believed to be the night that the Qu’ran was first revealed. It is a night that is considered to be particularly holy, better than a thousand months, the time when angels come down to Earth and the gates to heaven are open.

This month we will also witness another convergence between Muslims and power, but with a gender twist: the Shadow Minister for Community Cohesion, Sayeeda Warsi, will be inducted into the House of Lords as Baroness Warsi.

With her entry, we will for the first time have a Muslim woman Baroness representing each of the three main political parties in the House of Lords:

Does this mean that the varied interests of Muslim women will also be represented at the highest levels of government for the first time?

Sayeeda Warsi has certainly played to the idea that she is a voice for Muslim women. For instance, she took an opportunity during her recent speech at the Conservative party conference to criticise Labour’s “use of patronage politics”, where some men have been allowed to self-appoint themselves as “community leaders” and effectively silence others, by referring to her relationship with Muslim women as evidence:

Like the Asian women in Dewsbury who I met in 2005, who told me I was the first politician to canvass their views. Women who are the bedrock of our communities. But who too often have been forgotten and left behind.

She is also a regular speaker at events of the new Conservative Women’s Muslim Group. Unfortunately, the impetus for this group was the supposed “cultural tensions” between “Muslim countries” – though I’m not sure what these are in this context – and “the West”. As Lady Fiona Hodgson, Chairman of the CWO, explains:

Our fact finding trip to Washington in March 2006 highlighted many issues of international women’s human rights, and we were struck by the level of cultural tension between the Muslim countries and the West. We decided that we should get to know more about life for Muslim women in Britain and open up new opportunities for dialogue with them. The views and ideas can then help inform our policy development.

And what might this mysterious “life for Muslim women” include? Apparently mostly violence and oppression: the first event was on forced marriage, and the second, which is next Thursday 11 October, is on honour killings and violence against women.

Perhaps for their next event, just to prove that they’re not playing into the stereotype of what Shelina Zahra Janmohamed calls the “poor, oppressed, miserable, battered Muslim women!” in her ‘Five things I love about being a British Muslim woman’ blog post, they should invite some of us to come and talk about fashion, football, fighting, or the funnies?