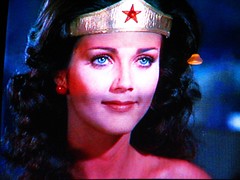 Do you think there will ever be a day when a woman with power is not seen as a woman first? When it is so common that it is unexceptional, so that gender is as irrelevant as, say, the type of shoes a male politician wears to work? When I don’t wonder whether Cherie Booth would have been asked to speak today had she not been the (former) Prime Minister’s wife?

With new research out from the Fawcett Society on the dearth of ethnic minority women councillors and Bhutto and Clinton poised to tip the total number of female heads of government to an unimpressive 5.7%, we seem to be very far from that day. Is it so strange then that the Guardian falls into the trap?

Argentina has for the first time elected a female president. Cristina Fernández de Kirchner won by a landslide and there is much to discuss about her policy positions, her vision for the country and her campaign tactics. Instead, I’ve learned that she likes designer labels, might have had cosmetic surgery and is really quite glamorous.

President Kirchner is an experienced politician. She was a lawyer before then becoming a senator and lawmaker. She has worked closely with her husband while he was president, delivering his agenda in Congress and the courts. Her own work includes being a women’s rights campaigner. The Guardian has suggested that she played into the iconic ghost of Evita during her campaign – which should have been described as astute (if cynical). According to another story in the Guardian, she is now understood to be ‘the most powerful woman in Latin America’ because Chile, the only other country on the continent with a female head of state, has a much smaller economy.

But some writers seem to be missing the point, and worse, doing it without irony. Take the Evita comparison: not the west end musical you might be thinking of, oh no. Eva Perón created the first major female political party in Argentina and as a result, according to her biographers (via Wikipedia), permanently transformed the relationship between women and politics in the country:

A mass of women who cared little about women’s rights and were indifferent to the concerns of middle-class feminists had entered politics because of Evita. They were the first Argentine women to be active in politics….

She’s even been credited with getting women the vote and legalising divorce. Not a bad icon to be compared to if only the writers would make the links.

Likewise James Sturcke doesn’t quite get there when he writes in the Guardian:

because in the same sentence, and without seemingly noticing what he’s done, he continues:

but she shrugs off criticism that she is overly image-conscious and flatly denies she has undergone plastic surgery.

It’s left to the President to try and make the point:

“I’ve always got dressed up, caked on the make-up,” she said in an interview last week. “Would I have to dress like I was poor in order to be a good political leader?”

Almost Ms President. Perhaps next time you could try for: maybe it shouldn’t much matter how you dress at all?

Photo by pbo31, shared under a Creative Commons license