And so it had finally arrived, that all-important date in the London Rollergirls’ calendar. The date that had teased us with its distance, which seemed to be simultaneously an age away and galloping full tilt toward us. Saturday 8 September: London Rollergirls’ inaugural bout.

I started my journey to the venue from my home in North Essex at 10AM, convinced that three hours was plenty of time to get there and would eliminate any aspect of rushing or panic. However, the forces of the universe conspired against me and I felt as if I was in a chase scene from some awful movie with everything that could possibly get in my way doing so. After a stint on a rail-replacement bus, the slowest train in the world and a Tube delay, I eventually made it to King’s Cross and things started looking up. As the Victoria line pulled in I spotted team mate N-emma-sis, our amazing events manager Silky Briefs and Team Pink’s guest skater from Stuttgart Valley Rollergirls, Dolly BustHer, and managed to start breathing again.

Arriving at the venue, it was clear that the entire London Rollergirls extended family was out in full force to make this event as amazing as we are. Because every bout-ready skater was vital to the teams, our injured veterans (two recovering broken ankles, one recovering fifth metatarsal and one cycling accident) had joined the support crew headed up by Silky and every new rollercub was roped in as well. Everyone had a vital role to play if we were going to pull this off.

All of a sudden, under bright strip-lighting, we were preparing for our skate-out

The next couple of hours are somewhat of a blur, I know that I helped to put inserts into the programmes while the track was laid – only because I have photos of a big group of us doing it, with boyfriends and friends roped in to help. I have one clear memory and that is after padding up, tripping over the rope perimeter of the track as the audience were filing in (smooth!).

I would like to write “and all of a sudden the lights were down and we were preparing for our skate out”, but only two weeks before the event we discovered that the spotlights didn’t actually work. So, all of a sudden, under bright strip-lighting, we were preparing for our skate-out – Team Black to Joan Jett’s ‘Bad reputation’ and Team Pink to the strains of ‘Oh bondage up yours’ by X-Ray Spex. Our league song (‘London calling’, by The Clash) managed to whip us up into a state of near hysteria as we realised the venue had SOLD OUT! We were skating in front of an audience of 400+ people! 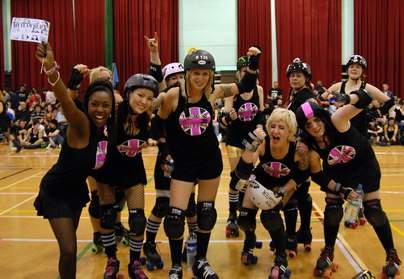 Suddenly, the first jam was lining up and the audience quickly took our cheering, booing, shouting lead. All I know of the first half is that Team Pink led for the first few jams, but by half time Team Black was firmly in the lead.

The fabulous Actionettes were doing their thing while we tried to cool down a little in the changing rooms. Going back in after half time, it dawned on me just how many other rollergirls were there! Eight girls had travelled all the way down from Glasgow to represent their league, as well as our derby sisters from Birmingham, Bedford and our fellow London league, the London Rockin’ Rollers. I briefly managed to chat to a couple of the girls, who were almost as excited as we were.

The second half began and, once again, I can’t remember much except taking a (double?) block during my last jam and landing on my tailbone so hard I thought I was going to puke on the track (I didn’t, I sucked it up and caught up with the pack).

Faster than any of us could believe, it was over. Team Black won, with the final score 100-77. Everything had gone so smoothly we could hardly believe it. Everyone grinned and hugged, grinned some more and hugged again. We’re still on a high two weeks later because THE LONDON ROLLERGIRLS MADE

Slice Andice – for directing in the face of adversity

Silky Briefs – for being the world’s best events manager

Amy Nitrate – for being the littlest score board operator!

Lucy – for filming us

All our rollercubs – for helping out and being the awesome next generation of LRG.

And to ourselves, of course, for being gracious winners, good losers, surrogate sisters & a bunch of severe hotties to boot!