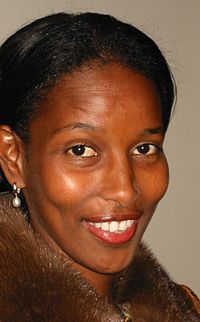 Readers undoubtedly know all about Ayaan Hirsi Ali – the former Dutch MP and advocate for Muslim women’s rights who was forced to flee from the Netherlands to the US in fear for her life. Undoubtedly, as well, readers will be aware that the Dutch government recently announced it will no longer pay for her bodyguards if she remains in the US.

Indeed, Denmark has just offered to take over – as long as she comes to live in the country.

But Kate Smurthwaite, who you may remember from her spot as a guest blogger at The F Word, has posted a link to an empassioned critique of the Dutch government’s decision by Salman Rushdie and Sam Harris.

In the LA Times, they set out the history of Hirsi Ali’s case and how the Dutch government has pathetically failed to fulfil its promise to protect her:

Hirsi Ali may be the first refugee from Western Europe since the Holocaust.

The whole thing is definitely worth reading.