Storm in a (Vintage) Tea Cup? 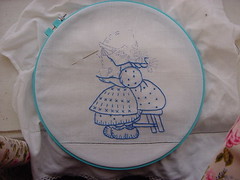 There’s a really interesting post over at the craft blog Needled. Entitled The Domestic in Drag, the post discusses the issues behind the aspirational, some would say unrealistic worlds portrayed by shows such as Nigella Express and publications such as Jane Brocket’s The Gentle Art of Domesticity (based on Brocket’s beautiful and popular craft blog Yarnstorm).

Considering recent attacks on the book in the Telegraph and in a Woman’s Hour feature entitled Is there anything wrong with reclaiming home crafts?, Needled discusses their portrayal of:

A world where there is always a clean, fresh shirt on the line and a cake on the table; where each member of the family will be perpetually wrapped cosily in its favourite quilt and the colours of your comfy shoes will always match those of your current knitting project. Like the performing home and family depicted in Nigella Express, the world of Jane Brocket is one of luscious surfaces, sensory overload and visual excess….with something (for me at least) hollow and questionable at its core. The book celebrates a sort of hyper-real—or indeed drag—early twenty-first century version of a 1950s domestic ideal.

It is fair to note that in response to accusations that she is perpetrating some kind of ‘Stepford Wife’ / hyper-priviledged version of reality, and assumptions about her background and class status, Brocket posted background information about herself, her family life, and career choices on her blog, although the post has now been removed. But I think Needled’s post raises wider issues.

Having a somewhat love/hate relationship with the hilarious Nigella Express, I found this whole discussion fascinating. It’s pretty obvious to anyone with a brain that Nigella’s world isn’t real; that the lifestyle portrayed is aspirational and unrealistic. Its like watching Jamie at Home and dreaming for a moment that we can all have our own butternut squash plantation, and then realising we don’t have a 5-acre garden and a bearded hippy gardener to look after it for us, and we never will.

But that still doesn’t mean we can’t enjoy these things for what they are and enjoy the fantasy. I enjoy watching these shows and reading these kind of books, but I don’t really believe life is necessary like that, just like I enjoy LOST without believing that all the loose plot ends will be tied up at the end of the series (as if!). There’s just something incredibly attractive and relaxing about the lifestyles portrayed in these books and shows.

As a letter from a teenage girl in a recent issue of the Radio Times pointed out, Nigella Express is positive for showing an attractive woman who really loves and eats a lot of food – very unusual these days, and commendable. But if you think the show is a portrayal of modern women’s lifestyle, you’re crazy, as ‘mofgimmers’ points out here:

How much does Nigella Lawson like Pea Soup? Well, on the strength of last nights Nigella Express (BBC2, Monday, 8.30pm) she likes pea soup to the point of the ridiculous. After making some soup, she had a quick bowl before she set off for her ‘really full on day’. Her full day seemed to consist of drinking some pea soup on a bus (full of very quiet and still actors) which she caught to go and sit on a bench (whilst drinking pea soup) and then, from the park bench she got in a taxi (drinking pea soup) and went home. Now, I don’t know if you’re like me, but a ‘full on day’ doesn’t usually involve me constantly drinking pea soup without a break.

Photo by mel_e_mo, shared under a Creative Commons License.