The problem with pink 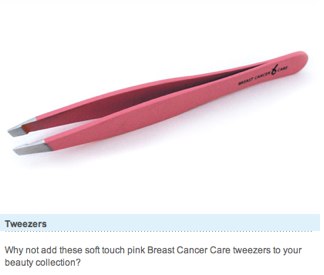 October has drawn to an end and the grey of winter is upon us. However, a walk down the high-street over the last month and you would have found that a sunnier colour dominated – pink. For we are just coming out of Breast Cancer Awareness Month, when money for charities and awareness is raised, via pink ribbons, pink marketing and a slew of pink products.

Great, you could say, for once an issue concerning women, their health, is warranting all this attention and fundraising. And so it should- more than 44,000 women are diagnosed with breast cancer each year, making it the most common form of cancer in the country, according Cancer Research UK.

But is breast cancer receiving the right kind of attention, is the money raised being spent in the best way? The ubiquitous use of the colour pink throughout Breast Cancer Awareness Month and the close alliance the campaign has formed with corporations invite such questions.

It is also worth questioning why breast cancer elicits all this attention as opposed to say, lung cancer – breast cancer is the commonest cancer, but does the popularity of the campaign also have something to do with how easily it fits into a popular cultural landscape which already focuses so much attention on women’s breasts?

Pink is the official colour of the breast cancer cause. An obvious choice perhaps, given that breast cancer predominately affects women (although around 300 men are also diagnosed each year, according to Cancer Research UK) and what colour is most stereotypically associated with women? Pink, of course.

Money from the sale of pink teddy bears, lipstick and lingerie goes towards fighting breast cancer, but why does the disease have to be relegated to the realm of feminine frivolity in order for this to happen?

This in itself is not a problem. All causes have their colours and even the prostate cancer campaign adopts the equally stereotypical blue.

For example, a ‘pink’ banner on the Breakthrough Breast Cancer website poses the question: “Are you ready to party?” On clicking the link, there’s information on how to throw a “pink party” to raise money for the charity: there’s even a whole section devoted to how to make it “pinktastic”.

A novel and fun way of raising money, and sure to be a successful one, but in the midst of all the pink, the partying and feel-good factor (which you get the impression is meant to come from the partying, not from anything more philanthropic) you can forget about what’s behind it all – breast cancer, which certainly isn’t about feeling good and partying.

The same goes for some of the pink products sold to raise money for breast cancer charities this month – the teddy bears, lipsticks and lingerie. Money from the sale of these pink products goes towards fighting breast cancer, but why does the disease have to be relegated to the realm of feminine frivolity in order for this to happen?

Some of the money from the sale of pink products and other items does go to breast cancer charities. But most of the money goes back to the companies

The way pink has been utilised in the breast cancer campaign is similar in effect to many other mainstream images and narratives of women we are fed every day. Women’s individual and complex identities and life experiences, and issues concerning them, are taken and channelled down into something narrower and more stereotypical, to make them acceptable and marketable. And so with breast cancer. The pink parade functions in the same way most mainstream images of women do, presenting a pretty, smiley, sexy, vacuous image with little regard for the more complex and ugly reality behind it.

The colour pink is not the only feminine stereotype endorsed in the breast cancer campaign. There is also shopping.

As shopping is a pastime still largely associated with women, it is hard not to think then that these companies and brands are keen to latch onto Breast Cancer Awareness Month not out of any ethical stance, or because they really care about women, but as a way of cashing into the female consumer market.

This is perhaps also why there has been a huge mainstreaming of the campaign – because it is commercially lucrative.

Of course, some of the money from the sale of pink products and other items does go to breast cancer charities. But most of the money goes back to the companies, so during October their own funds, and not just those of the charities they are raising money for, are boosted.

Think Before You Pink, a US-based campaign which encourages people to question the pink marketing of breast cancer fundraising, explain that some companies are vague as to how much they will actually donate to charity and may place caps on the amount they will give. They specify that in 2005, a Cartier watch was sold with the claim that proceeds would go to the Breast Cancer Research Foundation. In the end, the company only donated an amount equivalent to the sale of eight such watches.

Meanwhile, beauty companies such as Avon and Estée Lauder promised to donate the proceeds from some of the cosmetics they sold in October to breast cancer charities. This is an issue because there has been increasing concern that toxic chemicals in our environment, including parabens in cosmetics, may be causing breast cancer. So the lipsticks and face creams sold to raise money to tackle breast cancer could contain chemicals which may be contributing to the existence of the disease in the first place.

While these claims are controversial, No More Breast Cancer, a UK-based campaign, has pointed out that less than 50% of breast cancer cases can be attributed to a ‘recognised’ cause, such as weight, age or diet. Given that the incidence of breast cancer has increased more than 50% over the last 20 years, according to Cancer Research UK, it would perhaps be worthwhile to start acknowledging the role environmental factors may be playing in the onset of breast cancer, by funding more research into its causes and prevention.

At the moment, most fundraising goes towards researching cures and treatments for the disease. Fortunately, this has meant that the number of deaths from breast cancer has decreased in recent year – a sign that the pink products and parties have done some good. However the pink campaign championed by corporations, particularly the cosmetic companies, is not preventing any woman from getting breast cancer in the first place.

Pink has made it more palatable, while high-street stores have helped drill the message in. But is there another reason why ‘fighting’ breast cancer is such a popular cause? We know it’s the most common cancer, but as mentioned above, the emphasis on channelling funds into cure and not prevention is doing nothing to change that.

Breast cancer is not the biggest cause of cancer deaths. More women die from lung cancer, while it is men who are most likely to die from cancer overall, again according to Cancer Research UK.

So why aren’t we prettifying lung cancer? Why aren’t there mainstream campaigns aimed at tackling cancer in men?

It is time more money was donated to work aimed at the prevention of the disease. It is time to look above and beyond the feminine shackles of pink and shopping to really improve women’s health

Because, unlike other body parts, we’re constantly exposed to breasts anyway. They are present in our everyday popular cultural imagery. There is an importance attached to breasts – their shape, size, let alone their health – not attached to other parts of the body. It is normal to see women’s breasts on display, so when it comes to campaigning to ensure their health, it fits into the media and cultural agenda. This doesn’t apply to men’s bodies.

The importance we are meant to place on breasts begins to manifest itself from puberty. More than any other impending and developing sign of womanhood, such as body hair or periods, young women are taught it is breasts that are key to their femininity. Even their young male peers, while going all squeamish at the thought of menstruation and underarm hair, are enthusiastic about breasts.

Then, of course, we have the media, where every month could be deemed Breast Awareness Month. Most obviously this is seen in the lads’ mags, in which breasts are amputated from the women they belong to and exist in and of themselves merely for male pleasure. Women’s magazines and the fashion industry tell women how to improve the appearance of their breasts and how to make them more flattering and alluring. Then we have cosmetic surgery which advocates the cutting open of breasts so alien objects can be inserted into them so as to make them look really good. 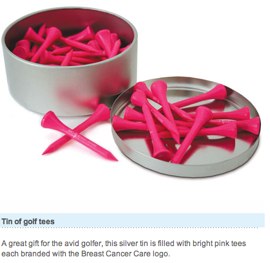 So women’s breasts are out there, often bare and sometimes fake, for all to see, most of the time. Therefore being ‘breast aware’ throughout October is no bigger a deal. We’re always supposed to be checking and looking at our breasts, so all the television programmes and magazines that run ‘how to check your breasts’ features during October are only furthering what we are all encouraged to do on a more superficial basis most days anyway.

Breast Cancer Awareness Month and its increasing popularity over the past decade has been a success – not only in how mainstream it has managed to become – but most importantly in the money it has raised to fund cures and better treatment for women with breast cancer, which is reflected in the decreasing death rate for the disease.

However, it is important to recognise that in the process breast cancer itself – the scary disease that all this fuss is meant to be about – has been corporatised, pinked and paraded around with little acknowledgment of this reality.

And that reality includes the fact that more women are getting breast cancer now than they did before the emergence of the pink ribbon. It is time more money was donated to work aimed at the prevention of the disease. It is time to look above and beyond the feminine shackles of pink and shopping to really improve women’s health.

If we don’t, what does that really say about how much we care for women’s health? Do we only care if it can be pinked, prettified and profited from?