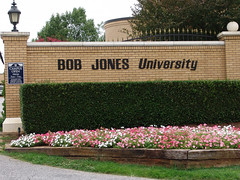 I don’t like to blog stories about Christian fundamentalists in the US. It’s a bit too much like shooting fish in a barrel. But Bob Jones University‘s instructions on dress and behaviour for prospective students is so creepy and ridiculous, I am breaking my own unwritten rule, even though I slightly suspect that it is in reality an elaborate farce.

Because could any university, even one in South Carolina, really require that adult students have a chaperone on dates ? (Only mixed sex dates though, so gay and lesbian students are… um… probably not very welcome actually.) Or require students to go to church?

Check out the dress code. For a start, and totally unsurprisingly, the requirements for men are listed first and much shorter than those for women.

Men are not allowed tattoos, body piercing, dyed hair, beards, sideburns, to wear jeans to class or anything with an Abercrombie & Fitch logo. Even if its covered up. Why? The company has demonstrated an “unusual degree of antagonism to the name of Christ and an unusual display of wickedness in their promotions”.

But, of course, this is positively free-thinking in comparison to the dress code for women, who are expected to wear below-the-knee skirts to lectures and are postively banned from wearing shorts anywhere except the sports hall and their halls of residence. Jeans are permissable, but only if a student wants to go ice skating (athletic, yet feminine!), and in – and flitting Christ-like between – halls of residence. Flip flops are also banned. As are tight-fitting anythings:

In case you thought that Bob Jones was only interested in the ‘modesty’ of its students, take note of the very specific way it requires women to cover up:

Hairstyles should be neat, orderly, and feminine. Avoid cutting-edge fads and cuts so short that they take on a masculine look.

Combat boots, hiking boots or shoes that give this appearance are not permitted.

So show no flesh, but for Christ’s sake dress like a girl. The regulations on acceptable films, videogames and music (even Christian rock is banned) are also giggle-inducingly awful. Weapons storage is available, though.

Photo by VerdeSam, apparently proving this place is real, and shared under a Creative Commons license