When did it go so tits up? 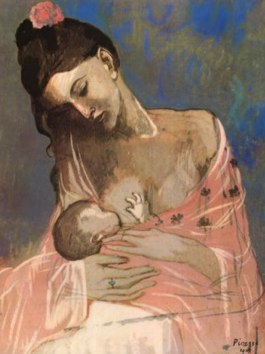 Before you begin to tut, let’s understand the idea behind this decision. The makers of Facebook can’t police all the photographs on their site and consequently – apparently – remove every photograph that displays exposed breasts. They want to be fair. If a woman has a topless photograph removed, she could point to a breastfeeding picture and say: “Well you can see her breast too. Why is she allowed that photograph but not me?”

One could argue that in the majority of breastfeeding pictures, you can’t see that much breast anyway. You can actually see more exposed breast in a picture of a woman in a bikini than you can in a picture of a woman nursing her infant. However, I think this ignores the larger point. How on earth did we get to a point where we could even consider images of breastfeeding obscene?

Consider that, as far back as the 12th century, images of breastfeeding were commonplace in Europe, mainly in churches as symbols of the Madonna and Child. Many of these images are not at all what we would term discreet. Baby’s face is not covered with a cloth. The mother is shown ‘letting it all hang out’, showing – shock horror – an entire breast uncovered!

Travel forward to the 14th century, and you have an artist such as Jean Fouquet, who painted a mother who is not even feeding her child, but preparing to feed him, showing an entire breast including nipple under her undone top. Same century, take a look at one of Luca Signorelli’s paintings, showing a woman holding her own breast, expressing milk into her toddler’s (yes, I said toddler) eager mouth.

Skip a few centuries-full of breastfeeding images and we come to Pablo Picasso, of course, in the early 20th century, depicting a woman in a pink dress feeding her baby, hand clutching a breast full of milk. The 1920s’ image that sticks in my mind is the Mary Cassatt painting of a woman with her dress loosened to feed her baby, who is more interested in playing with her face (my son is going through that phase at the moment. It’s both amusing and maddening).

But from the 1930s’ up until today, the images of breastfeeding in European art become fewer. Cut to the 20th and 21st centuries and what images of breasts do we see constantly?

Pictures of gravity-defying breasts in ‘lads’ mags’ such as Zoo, Nuts and Loaded, not to mention Page 3. Nearly every time you switch on MTV Dance, you’re greeted with a bevy of scantily clad dancers dressed to titillate male heterosexual fantasies, bumping and grinding their pneumatic boobs. 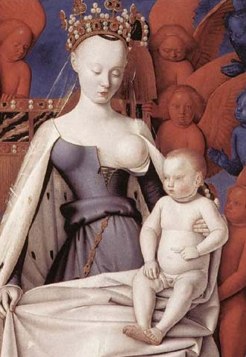 It seems more than a coincidence that the reduction of breastfeeding images in art coincides with the rise of infant formula and bottle feeding. In 1845, the India rubber nipple for the bottle was invented and the first commercially available infant formula was invented in 1867. In the late 1950s’, the formula Enfamil targeted a marketing campaign at hospitals and from then on, the instance of formula-feeding rocketed and we’ve never quite recovered.

(Please don’t think, by the way, that this is yet another go at mothers who choose to bottle-feed their babies. There are more than enough people out there who want to put mothers down for the choices they make. I’m not one of them.)

So here’s my theory, for what it’s worth. It’s a vicious circle.

The marketing men (and yes, they were mainly men) start to push infant formula to mothers. Breastfeeding is undermined. We see fewer and fewer women breastfeeding in public. It becomes the exception rather than the rule. Fewer pictures are taken or painted of breastfeeding mothers. Well – after all, there aren’t many left to paint! And then enter Page 3, in 1970. It’s not that breasts weren’t sexual before, but now, without their primary function, they are purely sexual.

So women start to feel embarrassed at getting a breast out in public to feed a baby, because, well, you wouldn’t want a man to see it would you?

And the trend towards the sexualisation of the breast continues. In 1994, Loaded magazine was launched. By now if you do breastfeed in public, well, all right, I suppose, but you’d better be discreet, cover up, after all. Ten years’ later and we see the launch of Nuts and Zoo and eventually Facebook.

And now, with popular culture absolutely saturated with images of breasts as purely sexual objects, we can’t see a breast at all without thinking it is purely sexual. Facebook, wanting to ensure its users aren’t exposed to explicit material, ban all pictures of exposed breast as “obscene” and that’s how we got here.

When discussing this matter with friends, I had mainly supportive comments, but also had a few negative comments along the lines of: “I don’t mind breastfeeding, but why would you want to take a picture of it?” One breastfeeding mother on Facebook even suggested that there is “nothing wrong with feeding in public, but you should at least be discreet and take a muslin sheet out with you”.

I say to breastfeeding mothers, be discreet if that’s your choice, but if you want to, feel free to ‘whip ’em out’ and let your baby suckle. Don’t let anyone put you off. Take a look at pictures of breastfeeding mothers through the ages at a website such as www.breastfeedingart.net and perhaps try out a few of the poses that were deemed so acceptable they were hung in churches and are still hung in public art galleries. Take pictures of yourself nursing your baby and share them with your friends and family. Get some modern images of breasts being used for the original purpose intended by nature out there in the public domain. And whether you breastfeed discreetly, whip ’em out, bottle-feed or don’t have children, please, every time you see a picture of a “bikini clad beauty revealing all”, remember that breasts have a primary function too, and this isn’t it!

And of course, if you’re a Facebook user, join the “hey Facebook, breastfeeding is not obscene” petition, currently running at over 20,000 people.

Ruth Moss is a feminist and mum to a five month-old baby. She typed most of this feature with one hand, holding a suckling baby with the other