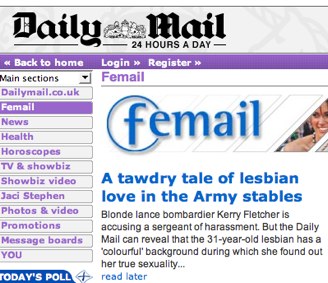 The Daily Mail’s ‘femail’ section is so offensive, there’s only enough hours in the day to do a round up.

First of all, we have a story arguing that because a minority of women in Sweden are staying at home to look after their children, the whole concept of maternity leave and flexible hours is totally redundant. Favourite quote, on Harriet Harman’s efforts to make it easier for women to balance work and family life:

But the plans have met with disapproving noises from the Tory Party and businesses.

Oh, well, we better forget all about that then.

Then we have this story about women who are put off procreating because they are worried about the impact their children would have on the environment. Of course, the Daily Mail has pulled out the most extreme examples it could find, such as a woman who gave up her dream of feeling “a little hand slipping into hers – and a voice calling her Mummy” and had an abortion because of her eco-views.

This one ticks all boxes on the Daily Mail’s right-wing agenda: painting women who decide not to have children as making a silly choice; saying women get abortions for the wrong reasons; and depicting environmentalists as weird kooky folk. Best quote:

Here’s another ‘made for the Mail’ story: the European Commission wants to include questions about our ‘consensual unions’ in the next census. I can see why they might have a problem with this one (and it does raise some privacy issues and safety issues, to be sure, as censuses are usually one-per-family rather than one-per-person). But I’ve picked it out for this unlikely quote from an Independence Party MEP:

“If this question appears on the census form I would suggest that everybody either claims either to be a virgin or to have at least 1,000 consensual sexual partners.”

This column on the apparent “rise of the toyboy” – is run through with horror at the idea that older women are having – shock, horror! – sex, and with younger men. How dare they defy the Mail’s stringent requirement that May-December relationships should work strictly on a younger woman/older man basis?

The menopause used to be nature’s way of telling women that the clock had beaten them.

Last week saw the Mail launch what Catherine Bennett called its “one week to save the family from lezzers campaign”, in today’s G2. I didn’t see this at the time, but perhaps she means this story about a totally unbiased poll conducted by a group called Christian Action Research and Education, which the Mail reported as finding that 80% of Brits oppose making it easier for lesbians to access IVF – although the actual question asked seems to have been to do with the importance of fathers.

Also see this over-excited reporting of some stupid comments made by the Archbishop of York, saying that the small number of lesbian mums is destined to “remove the father from the heart of the family”. Again, I can’t help but quote Bennett, who had me giggling over my lunchtime soup today:

Supporting his bid for enhanced power with an ambitious tour d’horizon, he took his congregation from the likely impact of the new legislation on Fathers4Justice (a shortage of batman suits), to a thunderous denunciation of modern society, with its “consumerist mantra, ‘I shop therefore I am’, or ‘Tesco ergo sum'”. We can only guess what horrors, witnessed in the supermarkets of York, could have prompted his despairing conclusion: “This virus of individualistic consumerism which informs a rights-based mentality is alien to those of us who come from another place – Africa – where they say, “I am because we are: I belong, therefore I am.”

Anyway, back to the Mail, which has rounded up its lesbian mums coverage with an over-long, gleeful “tawdry tale of lesbian love in the Army stables“. The jist? In 1997, when homosexuality was still grounds for dishonourable discharge, Kerry Fletcher lied and said she wasn’t gay. In 2007, now the rule has been done away with, she’s lodged a claim of discrimination, because her superior tried to “convert” her to men. How awful of her!