If turning an orangutan into a sex slave is evil, what does it mean to do that to a human? 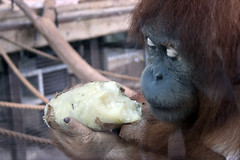 An organutan has been rescued from a “prostitute village” in Indonesia, according to Vice magazine.

The magazine interviewed Michelle Desilets, director of the Borneo Orangutan Survival Foundation – incidental to this particular story, this organisation does some really good work agitating to protect the organutan, which is threatened by the insatiable demand for the palm oil that is used to make everything from cosmetics to food to biofuels.

However, in this case she was talking about the rescue of Pony:

An orangutan from a prostitute village in Borneo. We found her chained to a wall, lying on a mattress. She had been shaved all over her body.

If a man walked near her, she would turn herself around, present herself, and start gyrating and going through the motions. She was being used as a sex slave. She was probably about six or seven years old when we rescued her, but she had been held captive by a madam for a long time. The madam refused to give up the animal because everyone loved Pony and she was a big part of their income. They also thought Pony was lucky, as she would pick winning lottery numbers.

Yes, like Warren Ellis, and also Vice, this story makes me cringe with shame over the behaviour of the human race.

It took us over a year to rescue her, because every time we went in with forest police and local officers we would be overpowered by the villagers, who simply would not give her up.

Best of all, no one was ever convicted of any crime, according to Desilets, because of the poor law enforcement in Indonesia.

But. And I would just like to stress again that I think the actions of these people was beyond dispicable. The way this story is framed is extremely problematic.

A little while back, What About Our Daughters and others posted about the huge media storm that was whipped up when an American football player called Michael Vick was caught in a dogfighting scandal. The basic jist of WAOD and others’ arguments was that a case of animal cruelty was getting an awful lot more attention than cases of violence against women.

While I get the point, at the time I was a bit worried that this was playing one problem off against another problem, to the detriment of the very, very serious issue of animal cruelty. Yet anyone who has watched Animal Hospital or those shows about the US animal rescue service on cable, will know – there’s a market of sympathy for small furry creatures that doesn’t seem to exist for human women.

And this is a pretty hideous example of this quandry:

Did the clients realize that they were in fact getting an orangutan?

Oh yeah, they would come in especially for it. You could choose a human if you preferred, but it was a novelty for many of the men to have sex with an orangutan.

What?! OK, I realise that on top of the animal cruelty yuckiness there’s also a bestiality yuckiness which must partially prompt this question and answer, but what both the magazine and Desilets seem to be tacitly implying is that the exploitation of the women in that “prostitute village” would somehow be better. According to this Unicef report on trafficking in Indonesia from a few years ago:

In Indonesia, it is estimated that 100,000 children and women are trafficked each year. Child prostitution is on the rise, and one third of the sex workers are being under 18 years old. The underlying causes of child trafficking include poverty and lack of economic opportunities for young people, the low status of girls, high demand for commercial sex, cheap labour, weak law enforcement, discrimination and conflict. Surveys on trafficking and sexual exploitation conducted in East Asia, including in Indonesia, show that trafficking of children is lucrative, well organized and linked to criminal activity and corruption. It is also transnational, often hidden and therefore hard to combat.

So while the horrific treatment of Pony the orangutan does make me sick to my stomach, so does the completely blase way that the story ignores the women and children who we can easily imagine might still be stuck in that village. That, to me, is also a sign of the moral bankrupcy of the human race.

Photo by Lex in the City, shared under a Creative Commons license