Mind the Gap is back – and posting about Trinny and Susannah

The brilliant blog Mind the Gap has relaunched, keeping their promise not to be gone for long.

Indeed, it’s only a matter of weeks since we were saying a fond farewell to the Cardiff-based group’s old blog. Based on the few posts up so far, the new blog is looking to be just as good as the old one was. 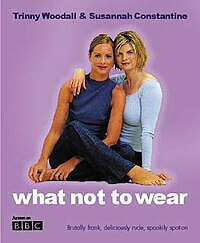 Vibracobra writes about an interview with Trinny and Susannah of What Not to Wear that appeared in the Guardian this week, by Hannah Pool. In particular vibracobra takes issue with the Guardian’s penchant for asking various women whether or not they consider themselves to be feminists:

This really has to stop. They’re making themselves and their interviewees look like idiots, and they’re turning feminism into something, for want of a better word, pink and fluffy, to be shared among women at Tupperware parties and knitting marathons, between recommendations of the best brand of chocolate to eat during your period.

I do get the point – although I think that, given that feminism is a basic belief that women are human, it does say rather a lot about women in the public eye if they fail to take this stance.

However, I was a bit more disappointed with the article for failing to grill Trinny and Susannah on their very particular view of the way women should look if they want to look good. For example:

Aren’t you part of the reason women feel under pressure to look a certain way?

Trinny: We are part of the pressure. We do have a sense that you should, as a woman, make an effort, mainly because when we see a woman who makes no effort, her first line of defence when we meet her will be: “I don’t care, it’s not important, there are more important things.” But what will always come out of that is a lack of self-worth, and it’s sad for any woman to be feeling that way. You don’t find women with great confidence dressed as if they don’t care.

S: Our advice is not unrealistic. We are not saying, “Go and have plastic surgery, you need to lose five stone, your nose is too big, you need to shave six inches off your thighs, you need to get your teeth done, you need hair extensions, go blond.” We say, “OK, you need this shaped dress – what a difference.”

OK, I have to admit I have a bit of a soft spot for What Not to Wear – and I haven’t seen any of their shows since that one was taken over by some other, less satisfying to watch, presenters. It’s desperately watchable television and, from a feminist perspective, much better than many of the makeover shows out there. This is for the reason that Susannah identifies: the premise of the show is that any woman can look good, not just the women who can slink into a size six to 10 in Topshop. I don’t think there’s fundamentally anything wrong with this, and it’s actually quite a nice antidote to the beauty industry’s alternative premise – which involves constantly aspiring to something completely unattainable.

Of course, there’s plenty of class and money questions to be answered here: not everyone has £1,000, or two posh and gropey stylists to stop them buying everything in lime green.

Where I take issue with them is in their extremely narrow definition of the ways it is possible to look good. Namely, for T&S looking good = looking feminine. If they are put to work on a woman who doesn’t wear or like feminine things, their attitude isn’t ‘how can we help her do this better?’ it’s ‘how fast can we put her in something pretty?’

In doing this, they become enforcers of gender-stereotyping norms of femininity.