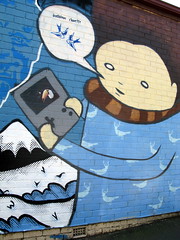 All the comments sent in during the month of October are now up and ready for your perusal.

And boy, did people have a lot to say this month: in particular about Ruth Moss’ feature on the Facebook ban on images of breastfeeding.

Samantha Jay’s message that housewives can be feminists too (and those of us who do work outside the home should not forget it) also garnered lots of praise.

Jennifer Drew’s latest feature – arguing that doctors and psychologists alike are too quick to pathologise women who don’t like penetrative sex – proved controversial as well.

But there’s lots of read on a whole range of features from last month and earlier, as usual. And this month, we seem to have a higher than average level of responses from authors to consider.

Photo by sensesmaybenumbed, shared under a Creative Commons license