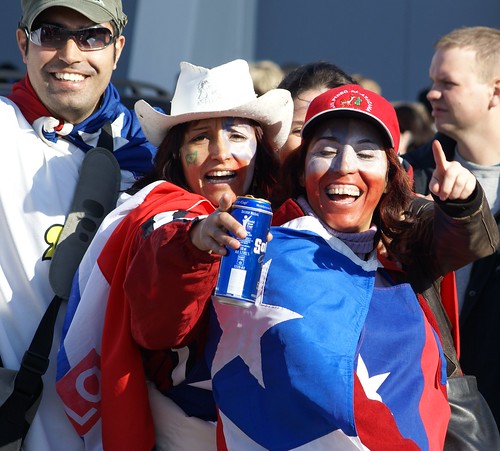 When I got this press release earlier, I couldn’t work out what annoyed me more – the poor punctuation, the selfishness of the survey respondents, or the equation of “the nation” with “the nation’s men”.

It’s from Setanta Sport, and it’s announcing some research results to coincide with the launch of its new sports news channel.

“17 per cent of UK males and 10 per cent of females admit to thinking about sport whilst in the heat of passion, according to a study by Setanta Sports News, the 24-hour rolling sports news channel.”

OK, fine. Weird, if you ask me, but fine. Then here’s the second paragraph:

“Setanta Sports News found that the nation’s sporting fixation doesn’t interfere with just sex; it also affects other events: 23 per cent of men said they had stood someone up on a date to catch up on their team, a further 20 per cent admitted to missing a friend’s wedding due to a vital sporting engagement and an incredible 4 per cent even said they had missed the birth of their child to watch their team play.”

Suddenly the female respondents mentioned previously have disappeared in favour of sweeping statements about “the nation”, and it is a nation comprising only men. And before you ask, no, there’s no later paragraph detailing the sacrifices women have made for their sports teams.

And THEN, as if that wasn’t enough, here’s a quote from new Setanta Sports News presenter Kelly Dalglish:

“We knew men were sports-obsessed but I think most women would be astonished to know men even think about sport during sex. I’m sure our new channel will provide men with exactly the right outlet for sporting news and insight so they can also find the time to properly concentrate on their women too.”

Personally, I’d say the media and the population at large would find it more astonishing that women think about sport during sex, but let’s gloss over that, shall we? Far better to ignore that, and package up Setanta Sports News as The Right Outlet For Sports News For Men. And as for men “finding the time to properly concentrate on their women”…can I suggest to Setanta that they employ Cheryl Cole as their poster girl?