Our report on Reclaim the Night 2007

No word yet on how many women took part, [Edit: It was about 1,500 according to the police], but last night’s Reclaim the Night was quite an experience. We were protesting against the epidemic levels of violence against women – against rape, domestic violence, and against the mentality that in order to protect ourselves from these threats, we should half live our lives, afraid to walk the streets, or wear what we want, or do what we want.

But, despite how serious these issues are, despite the impact they have had on us, our friends and our families (almost inevitably, if you consider that one in four UK women will experience domestic violence during her lifetime), the atmosphere in our bit of the crowd was joyful. 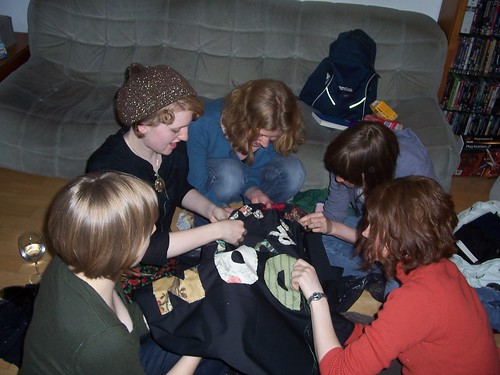 Some of us gathered together first, to make a banner for London 3rd Wave. 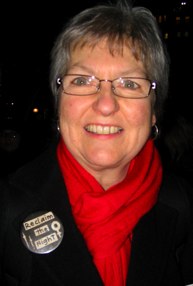 Mostly what I saw were beaming faces. As Charlotte from Subtext Magazine said at the time, the march gave everyone permission to make as much noise as we wanted – whooping and shouting and chanting and singing and blowing whistles. It was exhilarating to see so many women – so many feminist women – out on the streets making themselves heard, and to be part of it. A big thank you to all the organisers, who worked so hard to put the whole thing together.

The reaction from London’s Saturday-night crowds? Well, I personally only heard one, solitary man shout something stupid (but pretty much unintelligible). Otherwise some people were curious, some were enthusiastic, while some just stood there literally open-mouthed. 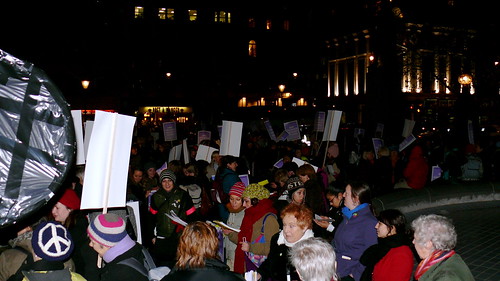 It’s hard to take photos that show how big protests are, but here’s a pleasing jumble of feminists and banners

Spearmint Rhino appeared to have shut up shop (or at least its front door) for the night, and the march paused outside to direct special attention towards the ‘gentlemen’s club’, and stick “sexist” stickers everywhere. There was one woman who lived right above it, out on her balcony to support the protest.

(Some people have mentioned on the London Feminist Network email list, that the women inside might have mistakenly thought the protest was directed at them, rather than the management and clientèle, but hopefully that wasn’t the case.) 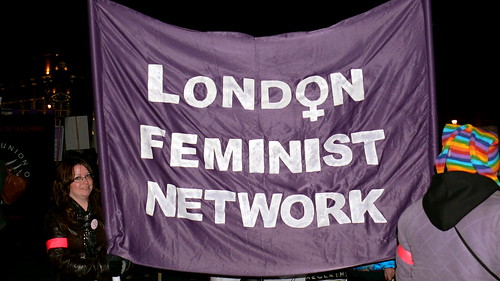 And, of course, it was a great opportunity to meet people – some of whom I’ve been in contact with for ages by email, but met for the first time in person last night – like Kate Smurthwaite, of Cruella Blog. But as well as that, I think we all got to meet a lot of amazing new people, some of whom you can see in the photos – including lots of F Word readers. I’ve posted a few here, but you can see all of the ones that I took on Flickr and on The F Word’s Facebook group. Or check out the fancy-shmancy slideshow/video thingy here. Please add a comment or tag if you recognise yourself in any of the photos.

Reclaim the Night is guaranteed to put a smile on any feminist’s face. To see all those women marching together through the centre of London was, as always, incredible. And to hear them singing, and laughing, and cheering, and shouting chants like this one:

NO means NO – it doesn’t mean maybe!

Everwhere we go-o – people always ask us – who we are, and where do we come from – So we tell them – WE’RE ALL FEMINISTS! LOVELY LOVELY FEMINISTS! And if you can’t hear us – we’ll shout a bit louder!

… that’s just… wow. Amazing. Who would have imagined this could be, looking back just a few years ago?

Reclaim the Night was proof of many of us have been saying for the last few years, and what Finn Mackay reiterated in her rousing speech in the post-march rally: there is a growing wave of feminist activism in the UK. Despite the lack of media attention (one journalist I spoke to said she had tried to sell a story about RTN 07 to many major newspapers, but none of them was interested), feminism IS a growing force. 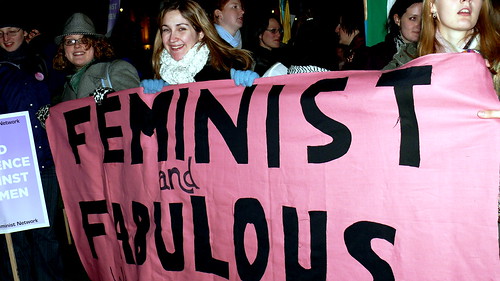 It goes without saying the march was fabulous. The banners and groups represented were lovely to see – those I caught a glimpse of included Warwick Anti-Sexism Society, East Midlands Feminists, FORWARD, Trans Women Against Violence, Sheffield Feminists, Subtext Magazine, City Girls, Ban the Bunny, Object, and lots lots more, alongside the banner I had a hand in stitching a few hours before, for London 3rd Wave Feminists. Despite the differences that exist within feminism and feminist groups, its important that we are all able to come together on occasions like this to reiterate our support for an end to violence.

The rally’s panelists reminded us all why we were there, with the statistics on violence and rape repeated amongst cries of “shame! shame!”. We were reminded that the original RTN marches were set up partly because feminists were so outraged that ‘only’ one in three reported rapes ended in a conviction. Today, that number is one in 20. As one of the speakers said, violence against women is at epidemic levels. A woman from Bradford Rape Crisis spoke movingly about her experiences (go and donate some money or time to Rape Crisis now). Another speaker highlighted women’s rights abuses around the world, and the UK government’s appalling treatment of women asylum seekers. 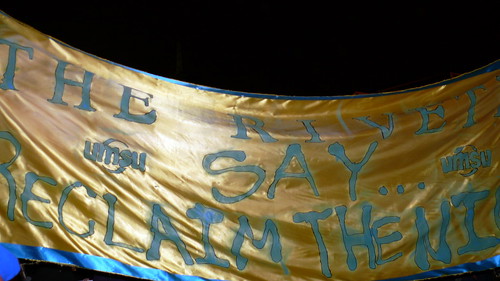 One woman I spoke to mentioned the 60s and 70s feminists with a nostalgic sigh (and she wasn’t even old enough to have been around then!) But looking around me at the march and rally, I was surrounded by many, many young women alongside the older generation. There IS a new feminist generation taking on the baton and running with it. As Finn said, they/we are the future, and by attending the march, we made history just as women did 30 years ago.

It was lovely to see and meet so many women and friends old and new.

To the organisers I say: Bravo. Bravo.

Next up: Million Women Rise – March 8th. Be there.

Also check out this video taken by Cate at Dollymix: