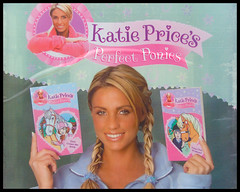 This is a bit of an old link, but a seemingly timeless subject: Jordan: why is she considered a role model?. This time it was the Scotsman asking, and I am quoted in there giving my own view on the matter, so I won’t go into it any more here.

However, I just wanted to pull out a couple of quotes from the article. This one is pretty depressing:

Louisa Horne, 28, a beauty consultant from Edinburgh who queued from 7am with her 11-year-old daughter to meet her idol on Saturday, says: “I’ve been a fan of Katie since she had her eldest son Harvey and since her scare with cancer. Before that, I just thought she was really beautiful, and I was jealous of the way guys ogled her, but since she’s become a mum, I really identify with her. I think she’s stunning, and I’m planning to get a boob job and Botox like her.”

I read things like this and get so sad: it just says so much about the weird dynamic between the average woman and female celebrities. First off we have the jealousy, which is only mitigated by motherhood – which presumably makes Jordan less threatening and more apple pie-ish – and cancer, then we have emulation and plastic surgery.

Let’s turn to Dr Marysia Zalewski, director of the Centre for Gender Studies at the University of Aberdeen, for some eminently sensible words about the Katie Price phenomenon:

“Katie Price comes across as someone who is assertive, strong and proud of the fact that she is a woman, but the way she presents herself to the world physically contradicts that… Being a strong woman shouldn’t mean having to have life-threatening surgery to exaggerate your breasts to enormous proportions. Some women do view her as a role model, probably because she’s open and down-to-earth, and because she has that Barbie-doll image but clearly isn’t stupid. However, she’s using conventional male views about female beauty for business purposes, so she’s an extremely contradictory role model.”

Image from sp3ccylad, shared under a Creative Commons license