UK drops from 9 to 11 in world gender rankings

The UK has dropped two places in the World Economic Forum’s annual rankings on gender equality – although our overall ‘score’ has increased a little bit.

Last year, the UK was in ninth place – this year we’re in 11th place, largely because of improvements in political and economic participation of women in Ireland and Spain. Which, of course, is great news for women in those countries and hopefully means there is a clustering and improvement in real conditions ongoing towards the top of the rankings.

There’s still some good news for women in the UK, though:

In the top rankings, there are few surprises, with Sweden and Norway retaining top place: 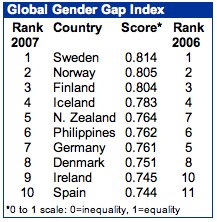 France made a dramatic leap from 70th place in 2006 to 51 in 2007, although it is still well behind many other European countries.

However, the US dropped six places from 25th place last year to 31st place this year – with a widening of the pay gap and a drop in female legislators, managers and senior officials. The country comes in behind Estonia, Namibia, Costa Rica, Belarus, Colombia, South Africa and Cuba.

Meanwhile, the performance of those at the bottom of the league table is as depressing as ever – Yemen comes in last this year, with a score of 0.4510 – where 0 is total inequality and 1 is total equality. The best performer, Sweden, scored 0.8146 on this scale – showing there is still work to be done even for those women in the best circumstances in the world.