Will Clinton fail at the polls because Americans want their presidents to play football? 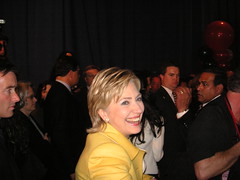 Stories about the US presidential elections are coming in to my RSS reader thick and fast, not least from all the US feminist bloggers. But The Guardian adds to the ongoing debate over whether Hilary Clinton could become the first female “leader of the free world”.

Given the ongoing media obsession with what female politicians wear, how much cleavage they show – indeed, anything other than their politics – it is particularly interesting that The Guardian article also considers how image could prevent Clinton from winning the top job:

Pat Schroeder, who briefly ran for the Democratic nomination 20 years ago, believes Americans simply cannot conceive of what a woman president would look like. “It is still really hard for women to have that working image that men have,” she explains. “We know what they do. They loosen their tie and collar, and throw their jacket over their shoulder. They talk on a cellphone. If they want to look tough, they play touch football.” Women, Schroeder says, don’t have a “uniform” for politics, unlike men with their “red tie, white shirt, blue jacket”.

As well as playing “touch football”, the long line of male presidents has indulged in other outdoorsy pursuits, such as shooting ducks, windsurfing or “perching on a stool” during a debate. OK, that last one does not take place in the Great Manly Outdoors, but, apparently, this ploy would distract a female president who would be obsessed with whether or not her slip was showing.

To which I say, people still wear slips?

However, this raises a serious point, and underlines just how wrapped up the job of president is in all of these masculine stereotypes – the cowboy, the everyman, the businessman – to the extent that it is actually difficult for anyone to imagine a woman in that role.

Of course, in the UK we have already lodged the experience of Margaret Thatcher PM into our collective imagination, so hopefully another woman would not experience this cognitive dissonance should she end up running the country. But then, our premiers are not particularly keen on the Hollywood-style romping about shooting at ducks, or the other presidential activities that seem to be de rigueur across the pond, so perhaps the one woman who has ever risen that far up the ranks simply never had to confront the problem so bluntly.

Photo by veni markovski, shared under a Creative Commons license