Will it soon be tougher to get an abortion in Scotland than in England?

This column is by Jacq Kelly, our guest Scottish affairs correspondent. Jacq Kelly is 27, comes from Lochgelly in Fife, and currently lives in Edinburgh. She got involved in politics at the age of 16 and stood for election to the Scottish Parliament in 2003. She came last and lost her deposit. Completely deterred, she left behind her political ambitions in 2004, in order to pursue a career in political journalism. In 2007 she left behind full-time employment to write a political novel, which is in no way autobiographical. 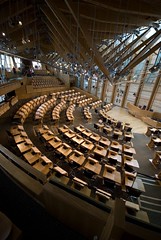 The Scottish First Minister Alex Salmond announced recently that, if he could secure cross-party support for it, a Commission would be set up in Scotland to look into making abortion a devolved issue with a view to decreasing the time limits on abortion.

Sadly, it’s not the first time that a public figure has played politics with women’s bodies – step up Cardinal Keith O’Brien who compared abortion rates to two Dunblane massacres a day – and it isn’t going to be over any time soon.

Despite the fact that there is no scientific case for a reduction in time limits – recently reiterated by the Science and Technology Committee at Westminster following a lengthy investigation into the issue – the anti-choice lobby are repeatedly able to get their hooks into elected Parliamentarians. They do this by employing a combination of bad science, electoral fear and what can only be described as emotional blackmail. The lynch pin of this campaign however, is an almost complete eradication of the rights and needs of women from the equation, with a disproportionate amount of focus on the foetus.

While it is, in some regards, disappointing that, 40 years after the Abortion Act 1967 was passed we are still having to fight the same deliberate misinformation and attempts to undermine a woman’s right to an abortion, there is a lesson in it for pro-choice supporters. Women in Scotland had, in effect, become complacent over the last few years on this very issue. Perhaps we didn’t feel that our rights were being threatened; perhaps, because abortion is a Westminster issue we didn’t think that the Catholic church could exert its disproportionate amount of influence over Scottish Parliamentarians on this matter at least. Talk of devolving the issue may have been just what was needed to shake us from our slumber and kick us into action. Bear in mind also those all too important Scottish peers and MPs who will vote on the Human Tissues and Embryos Bill in the coming months and may have to consider whether or not to support amendments that would reduce time limits and the case for action is all the more urgent. Note also that Alex Salmond is also an MP and may be voting on this issue, if he is able to attend the division.

Cue the setting up of a new pressure group – Women’s Abortion Rights Scotland – a protest outside the Parliament, two motions tabled by MSPs defending a woman’s right to an abortion, articles in the Scottish media about abortion that, for the first time in what seems like forever, presented the pro-choice side of the argument and not one, but two motions passed at STUC Women’s Congress supporting overwhelmingly a woman’s right to an abortion and condemning the Dunblane comments by O’Brien.

That’s all great, and WAR Scotland will be formally constituting within the next few weeks and going on to build on the hard work that has, in such a short space of time, had an impact. But there’s a note of caution to be sounded in all of this too. Opposition to the WAR campaign has come from some quite surprising quarters. There have been attempts to block its work – from those actually claiming to represent the pro-choice lobby – and attempts to steer its focus away from abortion and onto resisting the devolution of powers on abortion to the Scottish Parliament for fear of playing into the SNP’s hands.

People have spoken about their past involvement in abortion campaigns and, undoubtedly, those women (and men) who campaigned for abortion rights should be recognised as having done so. But that isn’t enough any more. The past is just that; the terms of the debate have changed and so too have the issues. We need to focus on the here and now and, without getting caught up in the Scottish political parties constitutional debate, talk about the issue of abortion. We need a fact-based campaign and media coverage of abortion issues that reflects that. We need to write to the newspapers to correct their shabby reporting every time it happens. We need to start insisting that this is treated as an important public health issue – not one based on hoccus poccus and the opinions of one or two maverick doctors who display a serious conflict of interest.

We should encourage groups to work on this, with their own strategies and expertise if they wish but with the same ultimate aim and nothing should be done to hamper their individual efforts – particularly where there is a party political motive for doing so. No one individual or pro-choice group owns this issue. We each need to get off our backside and fight for this right before we wake up to find it has, without our noticing, been eroded by amendment followed by amendment. Our different strengths should be recognised and – shock horror – valued. Any attempts to undermine pro-choice campaigns simply undermines all pro-choice campaigning and, quite frankly, is to the detriment of women. We have an uphill struggle ahead of us. The anti-choice lobby isn’t just organised, it has money – lots of it. There can be no space for turning in on ourselves.

Photo of Holyrood debating chamber by VerseVend, shared under a Creative Commons license