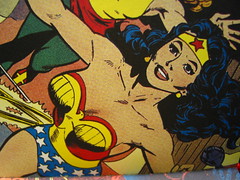 Sixty-six years into her reign, Wonder Woman is to get her first regular female writer in the person of Gail Simone, reports Wired.

Wonder Woman has become a bit of an icon for feminists, and you can buy a seemingly endless array of stuff featuring the character. I think that because of my age and lack of affection for all-things superhero, I’ve somehow missed out on the WW hype, but it’s still a bit of a surprise to note that it’s only in 2007 that the comic gets its first female script-writer.

Image shared by bbaltimore under a Creative Commons license