‘Feminine’ road signs banned in Sweden – but are they a good idea anyway? 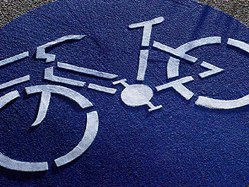 You know how the green man telling you it’s OK to cross the street seems to be… well… a man? If a human needs to appear in a road sign, it’s more than likely to be a stick figure which is at least interpreted as representing a man. If it’s not a male figure, then it is probably meant to represent a mother and child on their way to school.

Of course, this is a problem because it reinforces the idea that the default human is a man. Therefore, a very nice sounding local authority for an area in the south of Sweden called Hässleholm came up with an alternative design featuring a “very feminine” female character.

While I think this is a great idea in principle, those words “very feminine” make me wonder about the execution. Stick figure representations of women are generally a little problematic – the skirted stick figure used to indicate the women’s toilets are a prime example. Does a skirt indicate womanhood? Does a particular shape? It’s a difficult one – the other day, I was in a restaurant that just used squares of pink and blue plastic.

Unfortunately, The Local doesn’t carry a photo of one of these signs. Even more unfortunately, the effort has been banned by the national roads authority.

But the city of Vienna has undergone a similar process, and I can find one photo over on Benetton’s surprisingly good diversity blog. This one works for me – perhaps because of the boots. Although the primary function of an emergency exit sign, as in this case, is to direct people towards the exit, it can also have a secondary function, in making us think about the ingrained sexism of our surroundings.

Vienna also installed signs on the seats reserved for disabled people, pregnant women, etc, to show a father carrying a child on his knee. You can see more of the images here (although it is in German, so I have no idea what the actual text says) [Edit: Thank you Lisa for pointing out that this website appears to be anti-feminist. Also in German, but without the ‘men’s rights’ agenda, you can also find the images here]. I also really like the bike path sign which features a ‘women’s’ bicycle. As the Benetton blog says:

The aim is to break with some visual habits that force us to use a male shape when referring to the average subject of our society. To change them will mean to compel people to think, look and act differently.

In related news, The Local also reports that female soldiers have succeeded in getting the Swedish army to “castrate” the lion on the Nordic Battlegroup’s coat of arms.

Heraldry experts and Rush Limbaugh were not impressed:

“A heraldic lion is a powerful and stately figure with its genitalia intact and I cannot approve an edited image,” Vladimir A Sagerlund from the National Archives told Göteborgs-Posten.

However, I think this underlines the point. An army shouldn’t associate power and state with maleness.

Despite the emotive use of the word “castrate” (it’s removing a squiggly line on a drawing of a lion, people!), the Swedish army obviously agreed that the insignia shouldn’t be gender-specific and made the change.