Who to blame for sexist Xmas cards? Feminists, obviously! 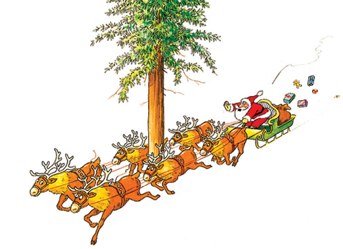 Today’s Sun features a column about ridiculing of men in Christmas cards.

OK, so I agree with the basic premise of William Coulson’s column. Cards for all sorts of occasional tend to be rife with sexism.

A few days ago, Charlotte expressed concern about sexism in the nativity story. And Coulson quotes a bishop who makes a good point about the way that daddy is marginalised in Christmas cards which depict the scene:

For example, when the Bishop of Hulme, The Right Reverend Stephen Lowe, wrote his article regretting the decline of Christian greeting cards.

“There is something profound in the symbolism of a mother’s love for her child. But I do get very irritated by the commercial and religious marginalisation of Joseph.”

Absolutely, bring on the equal parenting version of the nativity. (Although does that make God the ultimate absent father?)

But how does Coulson interpret this?

But Joseph — like the father in the family nowadays — is seen as just an optional extra. The feminist folly that excludes the fatherliness of Father Christmas, foredooms the two annual peaks in men’s suicide . . . Fathers’ Day and Christmas. 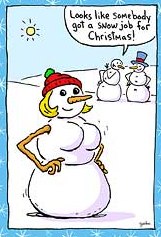 As readers will no doubt realise, this is a particularly dishonest argument. Yes, feminists have helped to undercut the ‘sacredness’ of the nuclear family with a mum that stays home and does the cleaning and a man who brings home the proverbial bacon. Feminists have also helped open up public space for families that don’t include fathers. But feminists would generally call for fathers to take on their fair share of the responsibility and work involved in raising children, rather than marginalising them.

As for Father Christmas, I have to say that a search for cards that offensively ridicule him didn’t turn up much, and the columnist doesn’t go so far as to actually describe any of the ones he’s seen or explain why they are problematic. I haven’t gone card shopping this year, so maybe I’m missing the obvious, but I also question the concept that he should be an immutable patriarch, and any jokes about him should be banned.

Then we have this ‘insight’:

Despite being forearmed with this insight, I was nevertheless shocked to find viciously man-hating cards for sale in a Newcastle church. I complained, and was asked if I had a sense of humour. I replied that I did, but the cards were devoid of wit, they were just crudely and cruelly anti male. They could have been designed by Jo Brandt [sic] after lobotomy. Christian women were selling these inane insults inside a church.

Perhaps Coulson will have a bit of sympathy for feminists then, who after all are accused of being humourless every time we offer a critique of misogynist humour?