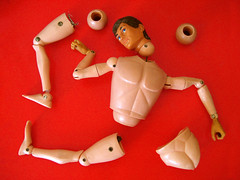 The government has produced guidance advising nursery schools to let boys play with weapons, because it aids their learning development, reports the Guardian.

OK, so there’s a lot to untangle here, but I want to particularly concentrate on the gender roles element, and the fact that it’s extremely problematic that the government is publishing official guidance on this which apparently implies that this is a ‘boy’ thing.

As Chris Keates, general secretary of the National Association of Schoolmasters Union of Women Teachers, points out:

“I think this is a clear example of gender stereotyping. I do not think schools should be encouraging boys to play with toy weapons.”

The guidance itself states:

“Images and ideas gleaned from the media are common starting points in boys’ play and may involve characters with special powers or weapons.”

In other words, the games that boys and girls want to play, and the toys they want to play with, are shaped by media depictions.

Check out what the children’s minister Beverley Hughes has to say about this:

“The guidance simply takes a common sense approach to the fact that many young children, and perhaps particularly many boys, like boisterous, physical activity pretending to be superheroes of one kind or another, such as Star Wars characters with their light sabres.”

Should the children’s minister really be saying that it’s mostly boys that like boisterous, physical play?

However, I do have to give this guidance some credit. It doesn’t actually ignore the issue at hand:

OECD report ‘Starting Strong’ asserts that we need to

identify the successful strategies that will build gender

equality. “We know that to give boys and girls equal rights

in the early years means to give them different and specific

opportunities. It is not sufficient to say that everything…

is open to all children, since at this age children choose

As practitioners working with children in their earliest

years, are we tuned in enough to offer the kinds of

experiences that will fully support boys as well as girls in

But it seems like somewhere between the theory and the practice, something is getting lost:

All children are unique individuals who develop

in individual ways. However, it is all too easy to

stereotype children along gender lines, even

if this process is unconscious. As adults we

differentiate between boys and girls from birth

in all sorts of ways – from how we dress them

to how we speak to them and expect them to

will often express these views themselves in

We often see that in their own self-initiated play,

can be different from girls’. If these interests and

choices are valued and supported, boys are

themselves as learners. As Kate Pahl notes:

“Much successful practice in the early years

consist of following ideas and play generated by

thought, and allowing their narratives to flower.”

So children absorb and internalise messages about gender roles, but they should be unambiguously supported when they act this out at playtime? Not that they shouldn’t be “valued and supported”, but surely in the previous paragraph the guidance just acknowledged that children’s play choices are heavily influenced by adult expectations? How is that allowing their own personal “narratives to flow”?

The guidance doesn’t really seem to pose any solutions to this conundrum.

Photo by Mr Jaded, shared under a Creative Commons license