How to Look Good Naked 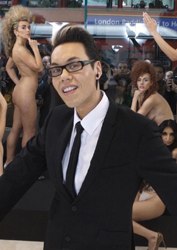 I love Gok Wan. For the uninitiated, the charming Mr Wan is the svelte, fashionably-bespectacled front man for Channel 4’s How to Look Good Naked. Don’t get me wrong, it’s not that I want to sprint off into the proverbial sunset with him, or that I’m desperate to get into his, undoubtedly budget-blowing, designer pants (which would be a futile exercise because he’s very clearly gay). No, what I feel for him is much closer to what you feel about a particularly flattering piece of clothing which makes you feel comfortable and confident. This is because, unlike the hosts of similar programmes, Gok manages to be kind and encouraging as well as entertaining. Granted, it may all be an elaborate charade for the cameras, but he really does appear to be a nice bloke who’s pretty good at boosting beleaguered women’s self belief.

Although the title misleadingly suggests that the programme is a handy guide for those thinking about entering the world of life modelling, or the adult entertainment industry, How to Look Good Naked is actually about feeling stylish, self-assured and at ease when you’re clothed too.

If you haven’t seen it, your average episode goes like this: a woman with huge hang-ups about her body consults Wan, stylist to Vanessa Mae and the Sugababes, for help. This involves her standing in front of a mirror in rather harshly lit room, in her bra and pants, describing exactly what she doesn’t like about her body (more often than not this part involves some tears and a hug from Wan). The lady in question also has to place herself in a row of women who are standing in order of their size (she inevitably overestimates how big she is and is extremely surprised). Next, Gok puts a colossal photo of the lady somewhere very public and asks strangers to comment on what they think of her body (they are always complimentary – anything otherwise would be not quite in keeping with the spirit of the show).

Then there’s the obligatory high street shopping trip during which Gok, like a Jedi Master with a particular emphasis on fashion, instructs in her the ways of well-fitting, supportive underwear, and also which of the season’s many “must-haves” are most flattering for her shape. After a bit of a struggle (and more tears) he convinces her that she should pose naked for a photo by a professional – she does and looks ravishing. This (finally!) makes her realise that she’s really quite foxy and an all round good person. So the whole thing culminates in her merrily strutting down a catwalk watched by loads of people with her head held high, looking and feeling fantastic. Thus, by the end of the show, she has recognised that her original perceptions of her body where more than a little skew-whiff and feels infinitely better about herself.

Someone really should let Gok know that using ‘hooters’, ‘racks’, ‘breasticles’ or ‘bangers’ instead of breasts is naff and childish

OK so far, so touchy-feely. And someone really should let Gok know that using “hooters”, “racks”, “breasticles” or “bangers” instead of breasts is naff and childish. But, negative points aside, the programme is ultimately about women changing their perceptions of how they look and not just accepting, but genuinely celebrating their bodies, instead of constantly chasing a ridiculously unattainable ideal of beauty that’s the result of a particular combination of genes and/or massive wads of cash.

If you’ve got it flaunt it, as the saying goes, and How to Look Good Naked’s healthy and refreshing starting point seems to be that everyone has some of ‘it’, whatever you perceive ‘it’ to be (or however you choose to define it). And also that fashion as a means of self expression doesn’t need to be solely focused on sexuality. Perhaps Gok’s capacity to be empathetic comes from the fact that he used to weigh 21 stone. So maybe he knows only too well what it feels like to be relegated to the level of some kind of inferior sub-species, by the ubiquitous messages that promote and reinforce the idea that nothing short of skinniness is the ideal.

So what of the other image-overhaul shows?

If How to Look Good Naked is a pair of this season’s skinny, jeans then Trinny and Susannah’s What Not to Wear and, more recently, Trinny and Susannah Dress the Nation, are more last season’s bootcut variety. Although their positive message “love your shape whatever it may be, and adorn it with flattering clothes” is pretty much the same as Gok’s, and their end results are almost always terrific, the posh duo are an odd mixture of being approachable and nurturing, yet snobbish and forbidding too.

There’s no getting away from the fact that how you feel about your appearance can affect how you perceive yourself generally. So it’s important that women (and men) feel comfortable and confident within themselves

They get visibly angry and frustrated (and are sometimes less than polite) when their charges refuse to take their advice, or fail to follow their fashion diktats to the letter. They’re over fond of manhandling participants’ boobs. The fact that there are two of them means that they occasionally come across as being bullying.

The nefarious premise of 10 Years Younger, meanwhile, is that some folk are so goddamn haggard that the time for a mere new hairdo, bit of slap and snazzy new wardrobe has long gone. Only a spell under the knife and top-notch cosmetic dentistry can do anything at all for them. The way in which it promotes, and thus contributes to the normalisation of, plastic surgery is deeply unpleasant. Presenter Nicky Hambleton-Jones is undoubtedly a very stylish woman, but unlike Gok, Trinny and Susannah she doesn’t exude a great deal of warmth. Despite her strangely-accented words of encouragement, you can almost hear her thinking: “Bloody hell, you really do look like shit.”

Also, some of the show’s participants have smoked an awful lot of fags, drank vat-fulls of booze and baked themselves in the sun, which begs the question, yes, they do indeed look great, but what about their insides?

I’d be the first to admit that looking good, however you define it, is most certainly not the be-all and end-all. Hence it would be extremely easy to dismiss all the programmes I’ve described above as shallow and frivolous trifles for the vain. But there’s no getting away from the fact that how you feel about your appearance can affect how you perceive yourself generally. So it’s important that women (and men) feel comfortable and confident within themselves. And if this is facilitated through makeover shows, where they’re supported to do this without slavish reference to the body fascism peddled by the industries and corporations whose existences are dependent upon keeping all of us in a constant state of insecurity about our looks, then so much the better. God knows we need it when we’ve got to the point where girls as young as six are being treated for anorexia.

Anyway as the lovely Gok would say, “Girlfriend, you look fierce!”

Dawn Kofie is 31 and lives in Edinburgh. She thinks she looks pretty good, naked or otherwise