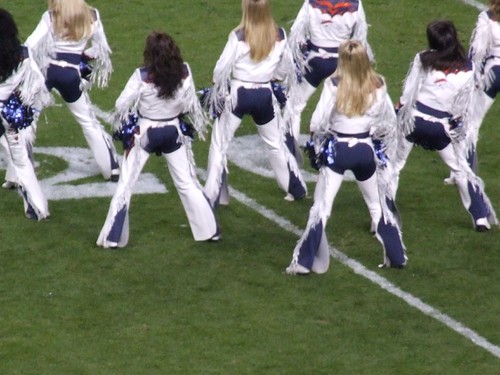 It’s one male cheerleader, to be exact, and he’s on the staff at Blackburn Rovers, who are remaining tight-lipped about their trailblazing recruit, but this is the first Daily Mail story that’s surprised me in a good way for years.

I’ve never been keen on seeing grown-up cheerleaders at football matches (I can cope with seeing under-12s doing little dance routines and acrobatic displays, but when it’s a wintry December evening and grown women leap about on the pitch in little more than a bikini and apparently take it as a compliment when they’re asked to get their tits out for the lads, it’s a little much). If we’re going to have them, though, I’m all in favour of it being an equal opportunity arena.

That’s what’s happened up at Ewood Park, where a chap known simply as Andrew has picked up the pom-poms. Of course, it’s not pleased the traditionalists; the Mail quotes a fan saying:

“This is what happens when you allow political correctness to run free. I don’t approve of male cheerleaders, or cheerleading in football.”

Another fan quoted in the piece upholds the heteronormative, heterosexist terms of engagement with this piece of wisdom:

“Just think he gets to go away with the rest of the cheerleaders and be the only guy there.”

Yes, just think! I’d like to take a moment to hail Andrew. In fact, I’m so enthused about this I may even compose my own cheer in his honour.